A massive medical admission scam has come into light in Karnataka after the Income Tax department raided three institutes. Following the raids, IT found pieces of evidence that for each seat, medical institutes are charging upto Rs 60 lakh per candidate. Sources state that the nexus is linked to Congress leaders. 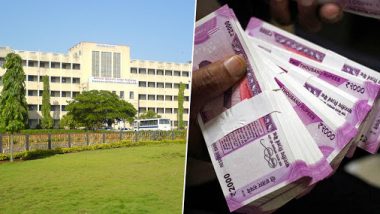 Bengaluru, October 12: In a shocking revelation, a massive medical admission scam has come into light in Karnataka after the income tax department raided three institutes. Following the raids, IT found pieces of evidence that for each seat, medical institutes are charging upto Rs 60 lakh per candidate. Sources state that the nexus is linked to Congress leaders.

According to a report, published in the NDTV, the IT officials on October 9 raided four colleges -- Sri Devaraj Urs Academy of Higher Education and Research, Sri Siddhartha Medical College, Sri Siddhartha Institute of Medical Sciences and Research Centre, and RL Jalappa Hospital and Research Centre. Surprisingly, all the medical colleges are either run by Congress leaders or are trustees of the institutes. Liquor Sale App of Goa's Excise Dept Becomes Object of Political Controversy.

Following the intelligence inputs on irregularities in medical college admissions, IT raided 32 locations in Karnataka and Rajasthan. Among them, four institutes were in Karnataka where irregularities were reported. The raids continued for over 48 hours. PMC Bank Fraud: Nirmala Sitharaman Meets Depositors After Facing Protest, Assures Regulations If Necessary.

Elaborating more on the raids and the finding, IT Department said in a statement on Friday: "During the course of the search, we found that the seats that were originally to be allotted by merit through MCC (medical counselling committee) were converted maliciously into institutional quota seats through the dropout system." Adding more, one of the officials said, "We have seized Rs. 4.22 crore in unaccounted cash and incriminating documents proving MBBS seats were sold to undeserving candidates for Rs. 50-60 lakh per seat."

Pointing at the involvement of an alleged racket, the officer stated: "A big network comprising medical colleges and brokers are part of this. Students who have already cleared NEET and studying in other medical colleges across the country are lured for monetary gratification and are made to appear for NEET exam once again. Then these students are made to opt for the medical colleges (named in the scam) by blocking the seats, only to opt-out at the end, which would result in the conversion of these seats to management quota, allowing the colleges to sell these seats to the undeserving candidates." PMC Bank Crisis: RBI Governor Shaktikanta Das Assures Nirmala Sitharaman To Keep Clients and Their Concerns on Top Priority, FM Says Govt 'Understands Justified Worries of Customers'.

As per the estimate, the total undisclosed income detected so far is around Rs 100 crore. This includes cash donations received for 185 seats averaging Rs 50 lakh to Rs 65 lakh per seat, says the officer. He added that they had seized undisclosed assets of Rs 8.82 crore. Further investigation is underway.

(The above story first appeared on LatestLY on Oct 12, 2019 09:21 PM IST. For more news and updates on politics, world, sports, entertainment and lifestyle, log on to our website latestly.com).