Kollam police was alerted at 9am by workers at the Mount Tabor Convent, who spotted the body of Matthew floating in the well. Blood stains were also reportedly noticed by them. 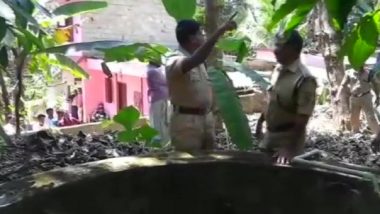 Police present at the spot where the nun was found dead | (Photo Credits: ANI)

Thiruvananthapuram, Sept 9: A 55-year-old nun was found dead at a convent in Kerala's Kollam on Sunday. The deceased has been identified as Susan Mathew, employed as a teacher at St. Stephens School in Kollam's Pathanapuram, located 80-km away from the state capital.

Kollam police was alerted at 9am by workers at the Mount Tabor Convent, who spotted the body of Mathew floating in the well. Blood stains were also reportedly noticed by them.

#Kerala: A 55-year-old nun found dead inside a well in Mount Tabor Dayara Convent in Kollam's Pathanapuram. Police at the spot. pic.twitter.com/FXCtRae4mi

The police has launched an investigation into a case. An official privy to the preliminary probe said the nun had called the matron at 8am, informing that she would not be attending the Sunday mass today due to ill health.

Mathew reportedly worked at the St Stephens School for the last 12 years. The institute, along with the convent where she was found dead, is administered by the Malankara Syrian Orthodox Church, based in Kottayam.

Another police official, while speaking to reporters, said they are trying to ascertain the cause of death. Although the case appears to be one of suicide, it could not be verified till prima facie evidence is gathered.

(The above story first appeared on LatestLY on Sep 09, 2018 01:16 PM IST. For more news and updates on politics, world, sports, entertainment and lifestyle, log on to our website latestly.com).