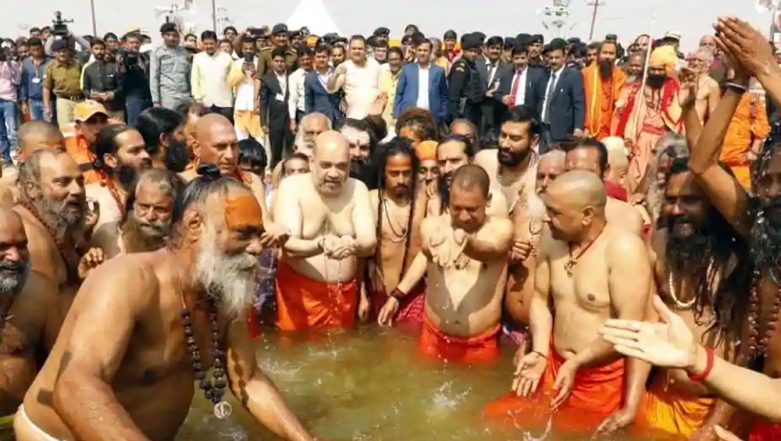 Prayagraj, February 13: Bharatiya Janata Party (BJP) President Amit Shah, Uttar Pradesh Chief Minister Yogi Adityanath along with several other leaders, took a holy dip in the Sangam in Prayagraj during the ongoing Kumbh Mela 2019. Deputy Chief Minister Keshav Prasad Maurya was also seen among the other leaders taking a holy dip. After the shahi snan, Shah and Aditynath performed an 'aarti' at the Sangam.

Shah also met various saints and seers during his visit to Prayagraj. The 2019 Kumbh Mela commenced on January 15 on Makar Sankranti, which was the first bathing day. Mahashivratri on March 4 will mark the last bathing day. Meanwhile, the departure of Akharas from Kumbh has already begun. The next main bathing day in Kumbh will be on February 19 on the occasion of Maghi Purnima. Kumbh 2019: Over Dozen People Reportedly Injured in Stampede in Prayagraj.

According to the Mela administration, the third 'shahi snan' held during the ongoing Kumbh this year accounted for more than 50 per cent of the total pilgrims and visitors to the Sangam city. 'Shahi snaan' is the central highlight of the Kumbh Mela and the most important part of the celebration. It is only after the completion of 'shahi snan' that people are allowed to take the holy dip. The officials said, so far over 16.44 crore people have taken a dip during the Kumbh, the largest congregation in the world. Kumbh 2019 Shahi Snan: Nearly 3 Crore Take Holy Dip on The Occasion of Basant Panchami in Prayagraj; See Pics.

According to a PTI report, over 9 crore people have taken a dip on the three 'shahi snans'- Makar Sankranti on January 15 (2.25 crore), Mauni Amawasya on February 4 (5.50 crore); and Basant Panchami on February 10 (1.50 crore), the administration said.