Locust Attack: Delhi ATC Asks Pilots of All Airlines to Take Precautions During Landing & Take Off As Tiddi Dal Spotted Near Airport Along Gurugram-Dwarka Expressway 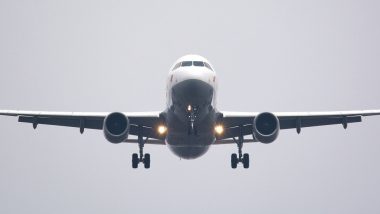 New Delhi, June 27: In the wake of the threat posed by locust attack, the Delhi Air Traffic Control (ATC) has asked pilots of all airlines to take necessary precautions during landing and take off. The order comes in view of locust swarms seen near the airport in areas along Gurugram-Dwarka Expressway. The order added saying that monitoring team set up over the matter. The operations at the Delhi airport are normal as of now. Locust Swarms Attack Gurugram! Netizens Post Scary Pics and Videos of Tiddi Dal Spotted in Gurgaon.

On Saturday, the skies over many parts of Gurugram turned dark as swarms of locusts descended on the town. Officials believe that the migratory pests are likely to spare the national capital for now. According to photos and videos that were shared on Twitter, the dark cloud of locusts, spread across two kilometres, crossed the suburban city. Reports informed that the swarm touched the Delhi-Gurugram border but did not enter Delhi. Locust Attack in India: Where 'Tiddi Dal' Came From And Where All It Has Spread?

Delhi Air Traffic Control (ATC) has asked pilots of all airlines to take necessary precautions during landing & take off in view of locust swarms seen near the airport in areas along Gurugram-Dwarka Expressway. Monitoring team set up over the matter. Operations normal as of now.

In May, the Directorate General of Civil Aviation (DGCA) had issued safety guidelines regarding flight operations in view of the threat posed by locust attack in certain parts of the country. In a statement, the aviation regulator said that locusts are generally found at lower levels of atmosphere and therefore pose a threat to aircraft in the critical landing and take-off phases of the flight.

(The above story first appeared on LatestLY on Jun 27, 2020 01:20 PM IST. For more news and updates on politics, world, sports, entertainment and lifestyle, log on to our website latestly.com).