This morning locust swarms have entered in Gurugram, Haryana. Several people have taken to Twitter to share pictures and videos of swarms of these desert locusts spotted in the city region. The authorities have swung into action and have asked Gurugram residents to stay indoors. 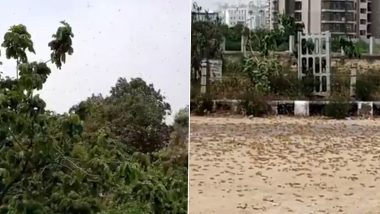 Parts of the country have been facing a problem of locust invasion since months now. This morning locust swarms have entered in Gurugram, Haryana. Several people have taken to Twitter to share pictures and videos of swarms of these desert locusts spotted in the city region. It has been confirmed that locusts have entered Gurugram on Saturday morning. Videos and pictures of a large number of locust swarms were shared on Twitter by locals. Locust Attack in India: Where 'Tiddi Dal' Came From And Where All It Has Spread?

This morning, there were reports of locusts damaging farms in Rajasthan's Hasteda village. A farmer here informed that this has been the fourth attack by locusts in recent times. The state is among the worst ones to be affected by the locust infestation. Other states that have been affected by these invasive swarms are Madhya Pradesh, Punjab, Haryana, Maharashtra. People in these places resorted to several unique ways to scare away the locusts like banging utensils to beating drums. Locusts are said to visit regions where there are farm areas and not much in the cities. But the swarms are now seen in Gurugram this morning. Locals were quick to share pictures and videos giving warnings to others about the invasion of these desert locusts.

Check Pics and Videos of Locust Swarms in Gurugram:

Swarms of Locusts in Gurugram

There is a locust attack in Gurgaon.

I have never seen anything like this. There are sooo many!! 😱 pic.twitter.com/r3efn3Qyax

DLF 2 , Gurgaon attacked by locusts . Hope everyone else in Gurgaon is keeping safe . Keep your windows and doors locked #staysafe #LocustsAttack pic.twitter.com/Ss9Q5nQ9hb

The authorities have swung into action and have asked Gurugram residents to stay indoors. Respective RWAs have informed residents to keep their doors and windows shut and also keep utensils handy to make a loud noise to scare locusts away. As the country already battles with a crisis of Coronavirus, the locust attack has been a problem since months. Prime Minister Narendra Modi last month assured that those affected by the locust attacks in certain parts of the country will be helped by the government.

(The above story first appeared on LatestLY on Jun 27, 2020 12:10 PM IST. For more news and updates on politics, world, sports, entertainment and lifestyle, log on to our website latestly.com).