A video of a girl thrashing a cab driver at a zebra crossing in Lucknow's Awadh have gone viral on various platforms of social media. Chairperson of Delhi Commission for Women (DCW) Swati Maliwal demanded action against the girl. 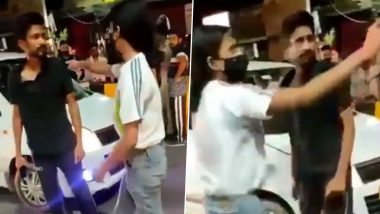 Lucknow, August 2: A video of a girl thrashing a cab driver at a zebra crossing in Lucknow's Awadh has gone viral on various platforms of social media. The video was first shared by a handle named "Megh Updates". However, Twitter was divide over the incident. Some condemned the girl's action, while others supported her by saying that she acted in self-defence as the driver was overspeeding and even jumped the red signal. Meanwhile, Chairperson of Delhi Commission for Women (DCW) Swati Maliwal demanded action against the girl. MP Shocker: Woman Forced to Drink Acid By Her Husband in Gwalior; DCW Chief Swati Maliwal Seeks Strict Action Against Accused.

Maliwal, in a tweet, said, "From a CCTV footage, it seems that the girl is thrashing a poor taxi driver as he didn't stop his car. This is very shameful. Who has given her the right to beat up someone? The UP Police should investigate the matter and should take action against the girl for taking law in her hands." Woman Posts Obscene Video With Minor Son To Go Viral on Social Media, DCW Sends Notice to Delhi Police To Register FIR.

According to reports, the girl has been identified as Priyadarshini Yadav. However, the exact date of the incident is not known. While sharing one of the videos, Megh Updates tweeted, "Viral Video: A girl continuously beating a man (driver of the car) at Awadh Crossing, Lucknow, UP. "Arrest Lucknow Girl" also started trending on Twitter after the video went viral.

Viral Video: A Girl Continuously Beating a Man (Driver of Car) at Awadh Crossing, Lucknow, UP and allegedly Damaging his Phone inspite of him asking for Reason pic.twitter.com/mMH7BE0wu1

Even the Person who came to Save the Cab Driver was Assaulted in these undated Viral Videos.

She can be heard saying the Car Hit her pic.twitter.com/CXuUoBaLUj

A traffic policeman intervened in the matter, but the woman kept thrashing the cab driver. She alleged that she was hit by his car. In the video, the drive could be heard saying that, "please call woman's" police.  In one of the videos, it could be seen that the man who came to support the drive was also assaulted by the girl.  A long traffic jam was reported in the area due to the incident.

(The above story first appeared on LatestLY on Aug 02, 2021 08:46 PM IST. For more news and updates on politics, world, sports, entertainment and lifestyle, log on to our website latestly.com).