In a shocking incident, a 25-yar-old woman was allegedly forced to drink acid by her husband and sister-in-law in Madhya Pradesh's Gwalior district. The woman is undergoing treatment at a hospital in Delhi and is in critical condition. 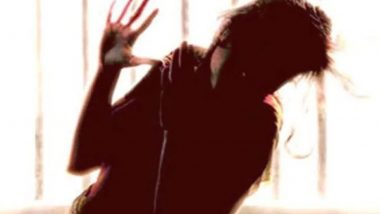 Gwalior, July 21: In a shocking incident, a 25-yar-old woman was allegedly forced to drink acid by her husband and sister-in-law in Madhya Pradesh's Gwalior district. The woman is undergoing treatment at a hospital in Delhi and is in critical condition. The incident took place on June 28. A neighbour of the victim got her admitted to a nearby hospital. Noida Woman Forced to Drink Acid by Sister-in-Law & Family, Victim in Critical State.

However, after the woman's condition worsened, she was shifted to Delhi for treatment. The victim alleged that her husband was in an illicit relationship with another woman. According to her, her husband thrashed her badly when she got to know about her husband's extramarital affair. The woman's brother informed the Delhi Commission For Women (DCW) about the incident.

Notably, a few days after the incident, the woman's husband, Virendra Jatav and the other accused were booked under the Dowry Act on the basis of the complaint filed by her mother. Reportedly, no strict action was taken against the accused. The complaint was registered on July 4. The victim got married to Jatav in April 2021. According to a report published by CNN News 18, the victim's family spent Rs 10 lakh in the marriage, but the husband later asked her to take Rs three lakh more from her parents for buying a car. UP: Minor Thrashed, Forced to Drink Acid for Refusing to Bring Drugs.

DCW Chief Swati Maliwal to Madhya Pradesh Chief Minister Shivraj Singh Chouhan seeking strict action in the case. She also demanded action against the police officers who handled the case in an insensitive manner. Maliwal and DCW member Promila Gupta also met the survivor at the hospital.  The MP police swung into action after DCW's intervention. The DCW chief said that woman's food pipe, stomach and intestines have got burnt and are visible. The victim can neither drink nor eat anything anymore, and also The woman is also vomiting blood very frequently.

Maliwal said, "The doctors are not very hopeful of her recovery as she is in a very bad state. It is a matter of shame that the Madhya Pradesh police dealt with such a serious case with this kind of insensitivity. I have written a letter to the chief minister of Madhya Pradesh, asking him to get the culprits arrested and ensure action against the police officers who tried to weaken the case." The woman is a native of Simariya in the Ghatigaon area of Gwalior.

(The above story first appeared on LatestLY on Jul 21, 2021 11:41 AM IST. For more news and updates on politics, world, sports, entertainment and lifestyle, log on to our website latestly.com).