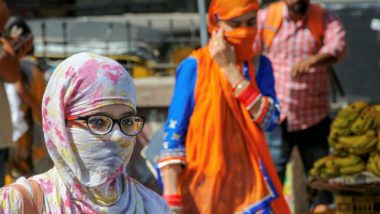 New Delhi, May 13: Maharashtra continued to see a rise in the mercury levels even on Wednesday as the average daytime temperature witnessed a surge. According to the All India Weather Bulletin by the Indian Meteorological Department (IMD) on May 13, several parts of Maharashtra will witness a rise a temperature in the coming days. The IMD said that the maximum temperatures is likely to remain between 40-43°C over some parts of Maharashtra during the next two days. Heatwave in India: Maharashtra, Gujarat, Rajasthan Brace for Hotter Days.

The others states that will witness the same weather conditions include Telangana, Rayalaseema and North Interior Karnataka. The IMD further added saying that northeastern states are likely to experience scattered to fairly widespread rain/thundershowers during next 5 days. According to a report by Skymet Weather, Malegaon in Maharashtra recorded the highest temperature of 43.6 degree Celsius, making it the hottest region in India. Meanwhile, Akola sizzled at 43.4 degree Celsius and Jalgaon witnessed a temperature of 43 degree Celsius.

On Tuesday, the mercury level in Kota in Rajasthan hit the 45 degree- making it the hottest place in India for two consecutive days- May 10 and May 11. In Maharashtra, Malegaon, Jalgaon, Yavatmal, Parbhani, Nanded and Ahmednagar districts among others were the areas that recorded a spike in mercury levels. Giving details about monsoon 2020, the IMD said the Southwest Monsoon is likely to advance over the Andaman Sea and the Andaman and Nicobar archipelago around May 16.

(The above story first appeared on LatestLY on May 13, 2020 02:52 PM IST. For more news and updates on politics, world, sports, entertainment and lifestyle, log on to our website latestly.com).