Monsoon Forecast for 2019: Heatwave to Continue as Monsoon Delayed in India, Kerala to Receive Heavy Rainfall by Saturday

On Thursday, meteorologists were quoted in reports saying that the favourable time for the onset of monsoon over Kerala is by Saturday, a week after its normal onset date. 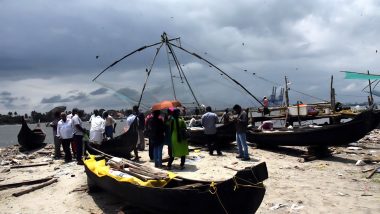 New Delhi, June 7: Heatwave conditions will continue to grip several parts of India for another one week as the arrival of monsoon has been delayed. The Indian Meteorological Department (IMD) said heavy rainfall is expected to hit the northeastern states of Nagaland, Manipur, Mizoram and Tripura on Friday. It further added saying that light to heavy rainfall was expected in southern, eastern and north-eastern states on Friday. According to a weather bulletin released by the IMD, heavy rainfall may also lash isolated places over Assam, Meghalaya, Kerala and Gangetic West Bengal during the next five days. Monsoon 2019: IMD Predicts Nationwide 'Normal' Rainfall For June to September Period.

On Thursday, meteorologists were quoted in reports saying that the favourable time for the onset of monsoon over Kerala is by Saturday, a week after its normal onset date. Although the monsoon was expected to hit Kerala in the next 48 hours, it is now delayed. Due to this, it may take at least seven days to reach the central and western regions of the country that are reeling severe heat wave conditions now.

The IMD said that an east-west (change of wind direction from easterly to westerly) shear zone has formed across the Lakshadweep­-Maldives­Comorin area, which is very likely to shift northwards gradually. This will power the onset phase of the monsoon.

In the last few days, several deaths have been reported due to heat stroke as the maximum temperatures ranged between 45 and 50 degrees Celsius. The heatwave conditions have created a havoc in Rajasthan, Madhya Pradesh, Maharashtra's Vidarbha region, Telangana and coastal Andhra Pradesh.

Parts of the national capital and surrounding states will get relief from the scorching heat only after June 11 when a western disturbance may lead to thunderstorm and rains in the northern parts of India.

(The above story first appeared on LatestLY on Jun 07, 2019 09:28 AM IST. For more news and updates on politics, world, sports, entertainment and lifestyle, log on to our website latestly.com).