Mumbai Rains 2022: City's Water Stock To Last for at Least Three Months Even if Monsoon Gets Delayed

The Tulsi and Vihar are the only two lakes that are located in Mumbai at the Sanjay Gandhi National Park (SGNP) in Borivali. 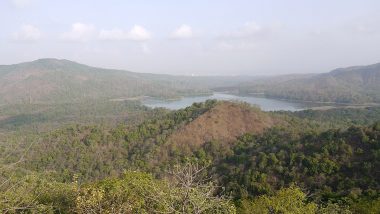 Mumbai, May 18: Ahead of the Mumbai Monsoon season, the country's richest civic body said that the seven lakes that provide drinking water to the city have 3,21,891 million litres of water, or 22.24 percent of the total capacity of 14,47,363 lakh million litres.

According to a report in the Indian Express, the current water stock in the city will last Mumbaikars for 82 days. And if the monsoon is delayed, then the water stock will be sufficient. Karnataka: Bengaluru School Girl Students Indulge in Street Fight Over Boyfriend, Video Goes Viral.

It must be noted that Mumbai gets water from Bhatsa, Middle Vaitarna, Upper Vaitarna, Tansa, and Modak Sagar lakes which are located in Thane and Nashik districts. On the other hand, the Tulsi and Vihar are the only two lakes that are located in Mumbai at the Sanjay Gandhi National Park (SGNP) in Borivali.

As per sources, the date for the normal onset of monsoon in Mumbai is June 11. Every year on October 1, the civic body takes stock of the water level in the lakes.

Sources from the civic body said that water cuts will be unlikely in the city for the year if the seven lakes are 100 percent full by the end of the monsoon season or by the end of September 2022.

(The above story first appeared on LatestLY on May 18, 2022 05:02 PM IST. For more news and updates on politics, world, sports, entertainment and lifestyle, log on to our website latestly.com).