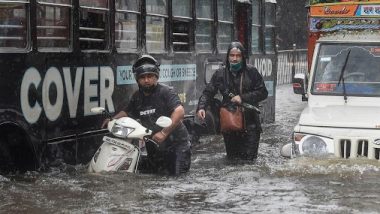 Mumbai, August 5: Intense rainfall is expected to lash parts of Mumbai even on Wednesday, the India Meteorological Department (IMD) has said. According to IMD Mumbai, the city received heavy rainfall at isolated places in the past 24 hours. Incessant overnight rains lashed Mumbai and several cities, the suburbs and the coastal North Konkan belt on Tuesday. Severe impact was seen on western suburbs with rainfall more than 150 mm. The heavy rainfall caused inconvenience as the road traffic and suburban trains were affected due to waterlogged tracks.

Extremely heavy rainfall is defined as a rainfall above 204.4 mm in 24 hours. Several areas in the city and suburbs received more than 200 mm rainfall since Monday night. The local trains which are being operated only for those engaged in essential services, were suspended on some routes. In its alert on Tuesday, the IMD had said that heavy showers were likely to continue for the next 48 hours. Mumbai Rains: Local Train Services Disrupted, BEST Bus Routes Diverted Due to Severe Waterlogging in Lower Parel And Other Areas.

Take a look at the tweets:

Intense rain is likely in Mumbai today. The city received heavy rainfall at isolated places in the last 12 hours. More impact was on western suburbs with rainfall more than 150 mm: , predicts IMD, Mumbai.

The weather agency had also issued a red alert for the Mumbai Metropolitan Region, Pune, Nashik, Raigad, Ahmednagar and Nashik districts of Maharashtra for Wednesday. The red alert was issued for the second consecutive day as rains have been lashing Mumbai and adjoining districts since Tuesday night.  "The red alert of extremely heavy rainfall at isolated places has been issued for Wednesday. The probability of it is very likely, which means it could actualise up to 75 per cent," an IMD official said.

The  Brihanmumbai Municipal Corporation (BMC) appealed to residents to stay at home. Mumbai, which was lashed by rain all night on Monday, received less intense showers during the day on Tuesday. Reports inform that several areas of the city had received more than 200 mm rain between midnight to Tuesday morning.

(The above story first appeared on LatestLY on Aug 05, 2020 08:49 AM IST. For more news and updates on politics, world, sports, entertainment and lifestyle, log on to our website latestly.com).