Prime Minister Narendra Modi on Saturday addressed the 76th session of United Nation General Assembly in New York. He talked about various issues including coronavirus, democracy, terrorism and current situation in Afghanistan. Scroll down to read the highlights of PM Modi's speech. 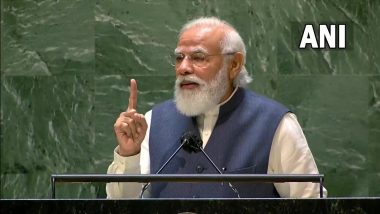 New Delhi, September 25: Prime Minister Narendra Modi on Saturday addressed the 76th session of United Nation General Assembly in New York. PM Modi talked about the ongoing coronavirus pandemic and paid his tributes to the people who lost their lives in the outbreak. He also talked about the vaccines being developed in India to counter COVID-19. PM Modi also said that the democratic values in India, adding  that India is a shining example of a vibrant democracy. Narendra Modi talked about the Azadi Ka Amrit Mahotsav on the 75th anniversary of Independent India.

PM Modi started his address at the UNGA by paying tribute to the people who lost their lives during COVID-19 pandemic. He said "In the last 1.5 years, the entire world has been facing the worst pandemic in 100 years, I pay tribute to all those who have lost their lives in this deadly pandemic and I express my condolences to their families." India Known as Mother of Democracy, Says PM Narendra Modi at UNGA.

Talking about India's achievements in COVID-19 vaccine development, PM Modi said, "I would like to inform the UNGA that India has developed the world's first DNA vaccine. This can be administered to anyone above the age of 12. An mRNA vaccine is in the final stages of development. Indian scientists are also developing a nasal vaccine against COVID-19."  He extended invitation to vaccine manufacturers around the world to come and make vaccines in India.

He said, "Today is birth anniversary of Pandit Deen Dayal Upadhyaya, the proponent of 'Ekatma Manav Darshan', meaning integral humanism or the development journey taken together, the expansion from self to universe. On the occasion of 75 years of independence, India is going to launch 75 satellites into space made by Indian students." Little Boy Who Helped His Father at Tea Stall is Addressing UNGA for Fourth Time: PM  Narendra Modi.

Narendra Modi talked about development. PM Modi said, "Development should be all-inclusive, universal and one that nurtures all." Adding that "The Corona pandemic has taught the world that the global economy be further diversified. That is why the expansion of global value chains is very important. Our 'Aatmanirbhar Bharat Abhiyaan' is inspired by this sentiment."

Focusing on the need of science based thinking he said, "Today, the world is facing an increased threat of regressive thinking and extremism. In such a situation, the entire world must make science-based, rational and progressive thinking the basis for development. In order to strengthen a science-based approach, India is promoting experience-based learning."

(The above story first appeared on LatestLY on Sep 25, 2021 07:09 PM IST. For more news and updates on politics, world, sports, entertainment and lifestyle, log on to our website latestly.com).