India enters 75 years of its independence this year. Our diversity is the identity of our strong democracy," said PM Modi. 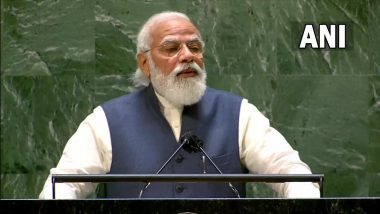 New York, September 25: Addressing the 76th session of the United Nations General Assembly (UNGA), Prime Minister Narendra Modi on Saturday said India is known as the mother of democracy, adding that "our diversity is the identity of our strong democracy".

"I represent the country, which is known as the mother of democracy. India enters 75 years of its independence this year. Our diversity is the identity of our strong democracy," said PM Modi.

"In a country that has dozens of languages, hundreds of dialects, different lifestyles and cuisines. This is the best example of vibrant democracy," he added. The theme for this year's General Debate is 'Building Resilience through hope to recover from COVID-19, rebuild sustainably, respond to the needs of the planet, respect the rights of people, and revitalise the United Nations'. India Has Developed the World’s First DNA Vaccine, Says PM Narendra Modi at UNGA.

The high-level segment of the 76th UNGA began in New York on Tuesday. The UNGA meeting this year is in a hybrid format but a large number of leaders have arrived in New York.

PM Modi had arrived in Washington on Wednesday for a three-day visit to the country. This was his first visit beyond neighbourhood since the outbreak of the COVID-19 pandemic.