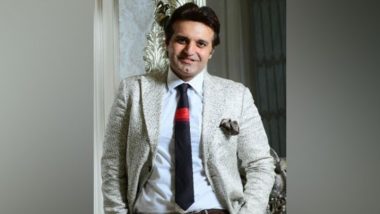 New Delhi August 14: Ar Nayan Raheja of Raheja Developers Ltd has been named amongst the '40 Under 40 Most Influential Indians 2019-20' by AsiaOne Magazine. The award winners were virtually felicitated and the programme was telecasted on the leading news channel CNBC TV18, being their media partners.

The official ceremony for the same will be held on September 21st, 2020 at Taj Palace Hotel, New Delhi with due preventive measures and precautions.n"I am extremely thrilled and honored to receive the recognition. The fact that the jury consisted of some of the most respected names only adds to the value of this honor.

The recognition also motivates us to fulfil the dreams of home-buyers and it will be our endeavour to continue delivering iconic projects that reflect the futuristic vision Indian real estate industry beholds," said Ar Nayan Raheja, Raheja Developers upon receiving the award.

AsiaOne 40 under 40 Most Influential Indians 2019-20 is a prestigious annual selection of the most prominent personalities globally. This list is entirely made of those who have made an indelible mark for other leaders to follow and generations to admire!

Ar Nayan Raheja has been at the forefront of leading Raheja Developers to greater heights. Under his dynamic and visionary leadership, the group has developed some of the iconic projects, which are architectural marvels in Delhi NCR.

'Architect of the Year - Commercial' at Realty Plus Excellence Awards 2013n* 'Young achiever Award' at Realty Plus Excellence Awards 2013* 'Meri Dilli Award-2012' for outstanding contribution in the field of Real EstatenRaheja Developers is one of the most trusted real estate companies in India, which is known for quality construction, timely delivery and above all, a developer with niche design sensibility primarily because of its in-house design strength. This story is provided by NewsVoir.