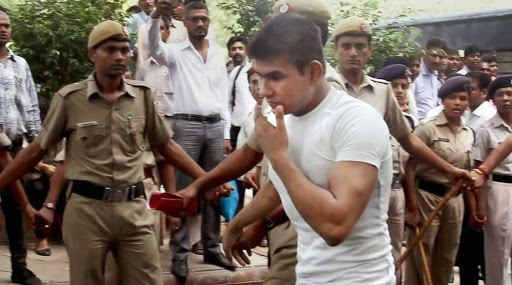 New Delhi, February 14: Supreme Court on Friday dismissed the petition of death-row convict Vinay Kumar Sharma challenging the rejection of the mercy petition by President Ram Nath Kovind. The convict was seeking mercy under Article 72 of the Indian Constitution. Vinay's mercy petition was rejected by President Kovind on February 1. Nirbhaya Case Timeline: Chronology of Events in the 2012 Gangrape and Murder Case.

The order was pronounced by a three-Judge panel comprising of Justices Ashok Bhushan, R Banumathi and AS Bopanna after it was reserved for orders on Thursday. "We do not find any ground to interfere with the decision of the Hon'ble President," the bench said. Nirbhaya’s Mother Breaks Down In Court During Hearing, Says Judge Is Supporting The Convicts.

Vinay also contended that he is suffering from "mental illness" therefore, he cannot be issued a death warrant. Last month, the top court had dismissed the curative petition of Nirbhaya gang rape and murder convict Vinay Sharma against the death penalty awarded to him.

Their victim, a 23-year-old Nirbhaya, was gang-raped on the night of December 16, 2012, in a running bus in the national capital. After the bone-chilling crime, the victim was thrown out of the bus. She later succumbed to her injuries in a Singapore hospital.

All the six accused were arrested and charged with sexual assault and murder. One of the accused, who was a minor was released after spending three years in a correction home. Ram Singh, the main accused, committed suicide inside the prison. The four convicts - Pawan Gupta, Mukesh Kumar Singh, Akshay Kumar Singh and Vinay Kumar Sharma - were sentenced to death in just about a year after the heinous crime they had committed.