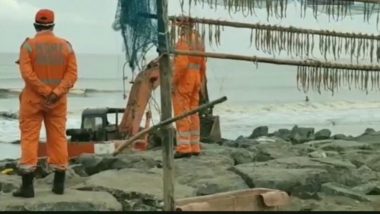 Mumbai, June 2: In view of the impending severe cyclone Nisarga, National Disaster Response Force (NDRF) has been kept on alert in Maharashtra as necessary preventive action. According to a Hindustan Times report, sixteen teams of NDRF, comprising 45 jawans each, are on alert in the state. While 10 teams have been deployed, six are kept on standby. Nisarga Cyclone Could be The First Tropical Cyclone in 129 Years to Hit Maharashtra in June.

NDRF Teams Deployed to take stock of the situation:

NDRF has deployed 11 teams in Gujarat and one each in Daman and Diu and Dadra and Nagar Haveli along with five teams of State Disaster Response Force (SDRF). Seven districts of Surat, Navsari, Valsad, Dang and Bharuch in south Gujarat, Bhavnagar and Amreli in Saurashtra in addition to Union territory of Daman have been put on high alert.

India Meteorological Department (IMD) on Tuesday said, "It is very likely to intensify into a Cyclonic Storm during next 12 hours and further into a Severe Cyclonic Storm during subsequent 12 hours." IMD further forecasted that it is very likely to move nearly northwards during next 6 hours and recurve north-northeastwards thereafter and cross north Maharashtra and adjoining south Gujarat coast between Harihareshwar (Raigad, Maharashtra) and Daman during the evening of June 3.

It's very likely to move nearly northwards during next 6

Gujarat coast between Harihareshwar (Raigad, Maharashtra) and Daman during the afternoon of 3rd June: IMD https://t.co/PcM2oh9Yn6

In view of the impending severe cyclonic storm Nisarga, Home Minister Amit shah spoke to Chief Ministers of Gujarat, Maharashtra and Administrator of Daman & Diu. In addition to this, he assured all Central help in view of the Cyclone as it is expected to hit some parts of these States/UTs.

(The above story first appeared on LatestLY on Jun 02, 2020 10:15 AM IST. For more news and updates on politics, world, sports, entertainment and lifestyle, log on to our website latestly.com).