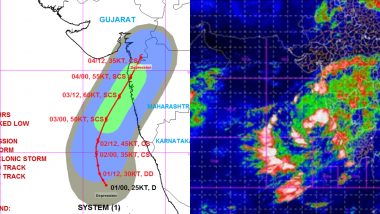 Mumbai, June 1: Nisarga cyclone is expected to hit the Maharashtra and Gujarat coast by June 3 as it is very likely to intensify into a 'deep depression' over the Arabian Sea during next 12 hours. The system will then intensify further into a 'cyclonic storm' during the subsequent 24 hours which is on June 2 and then into a 'Severe Cyclonic Storm' by June 3, the India Meteorological Department (IMD) has said. On Monday, the well-marked low pressure area over Arabian Sea and Lakshadweep area concentrated into a depression at 5.30 am. It now lies about 400 km southwest of Panjim (Goa), 700 km south-southwest of Mumbai in Maharashtra and 930 km south-southwest of Surat in Gujarat, the IMD stated.

Reports inform that Nisarga will be the first tropical cyclone in 129 years to hit Maharashtra in the month of June as no weather system turned into a cyclone and made a landfall along the Maharashtra coast during June since 1891. Anand Kumar Sharma, Deputy Director General, India Meteorological Department (IMD) said the depression in the south west Arabian Sea is likely to concentrate into a deep depression in next 12 hours and in next 24 hours it is going to become a cyclone.

The sea condition is very likely to be rough to very rough over Arabian Sea during next 48 hours and fishermen are advised not to venture into southeast Arabian Sea, Lakshadweep area and along & off Kerala coast. Check District-Wise Rainfall Forecast For Maharashtra.

The IMD said the cyclonic storm is very likely to move nearly northwards initially till morning of June 2 and then recurve north-northeastwards and cross north Maharashtra and south Gujarat coasts between Harihareshwar in Raigad (Maharashtra) and Daman during evening/ night of June 3. Meanwhile, the depression over south coastal Oman and adjoining Yemen remained practically stationary weakened into a well marked low pressure area and lay centred over the same region. It is very likely to weaken further gradually into a low pressure area during next 24 hours.

(The above story first appeared on LatestLY on Jun 01, 2020 01:25 PM IST. For more news and updates on politics, world, sports, entertainment and lifestyle, log on to our website latestly.com).