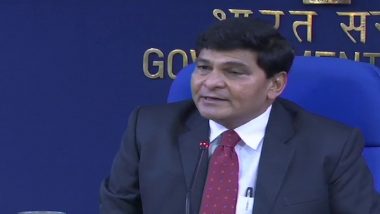 New Delhi, September 28: The Centre of Monday appointed PD Vaghela as the chairman of the Telecom Regulatory Authority of India (TRAI).  He replaced Ram Sewak Sharma. PD Vaghela is currently serving as a secretary in the Department of Pharmaceuticals. TRAI Mulls Show Cause Notice Against Vodafone Idea on Priority Plan Issue: Source.

The government in an order said, “The Appointments Committee of the Cabinet has approved the appointment of Dr PD Vaghela, IAS (GJ:1986), Secretary, Department of Pharmaceuticals as Chairperson, Telecom Regulatory Authority of India (TRAI) for a period of three years or until he attains the age of 65 years, or until further orders, whichever is the earliest.” Trai Poses More Questions to Bharti Airtel, Vodafone Idea on Priority Plans.

Notably, Sharma is set to demit the office on September 30. He is a 1978 batch officer of the Indian Administrative Services has been at the helm of the regulatory affairs since August 10, 2015.

(The above story first appeared on LatestLY on Sep 28, 2020 10:17 PM IST. For more news and updates on politics, world, sports, entertainment and lifestyle, log on to our website latestly.com).