PM Narendra Modi on Sunday dedicated to the nation three key projects related to the petroleum sector in Bihar through video conferencing. He hit out at former tenures of government for their lack of will to develop Bihar. The Premier stated that lakhs of sisters and poor families in Bihar have benefited from Ujjwala Yojana. Here are the highlights. 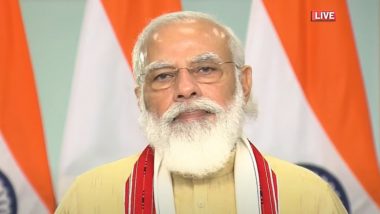 New Delhi, September 13: Prime Minister Narendra Modi on Sunday dedicated to the nation three key projects related to the petroleum sector in Bihar through video conferencing. PM Modi stated that Bihar is the powerhouse of the country's talent and the influence of Bihar's youth and talent is everywhere. He also hit out at former tenures of government for lack of will to develop Bihar.

Addressing the people of Bihar through video conferencing, PM Modi said, "When I say that Bihar is the powerhouse of the country's talent, energy centre, it will not be an exaggeration. The influence of Bihar's youth, the talent here is everywhere." Adding more, he said, "There is neither a shortage of power in eastern India, including Bihar, nor has nature lacked resources here. Despite this, Bihar and East India remained behind for decades in terms of development. Many of the reasons for this were political, economic, priorities." PM Narendra Modi Inaugurates ‘Grih Pravesham’ of 1.75 Lakh Houses Built Under PMAY-G in Madhya Pradesh, Says 'Now Government is Going to the People Unlike Earlier Times'.

Applauding the Nitish Kumar government in the state, the Premier said, "During the rule of Nitish Ji, two large universities, one IIT, one IIM, one NIFT, one National Law Institute in Bihar have opened many big institutions. Due to Nitish's efforts, today the number of polytechnic institutes in Bihar has also increased more than three times than before." PM Modi even claimed that today in Bihar's villages, the availability of electricity in cities is more than ever.

Elaborating on the benefits of the gas pipeline project, PM Modi said, "Due to this gas pipeline, big cylinders are being installed in Bihar. Two new bottling plants have been launched today in Banka and Champaran. Both these plants can fill more than 1.25 billion cylinders every year." Adding more, he said, "These plants will facilitate your districts of Banka, Bhagalpur, Jamui, Araria, Kishanganj, Katihar, East Champaran, West Champaran, Muzaffarpur, Siwan, Gopalganj and Sitamarhi in Bihar."

He also said, "The Prime Minister package given for Bihar had 10 big projects related to petroleum and gas. About Rs 21,000 crores were to be spent on these projects. Today this is the seventh project in which work has been completed, which has been dedicated to the people of Bihar." Apart from this, the Premier stated that lakhs of sisters and poor families in Bihar have benefited from Ujjwala Yojana scheme during COVID-19 lockdown.

Ahead of dedicating these projects, PM Modi expressed his grief on the demise of former Union Minister and Rashtriya Janata Dal veteran Raghuvansh Prasad. PM Modi said, "Prasad's focus was always around the development of Bihar." However, he claimed that Prasad was unhappy with the political stand of the party he was associated with.

During the video conferencing, PM Modi dedicated Durgapur-Banka section of the Paradip-Haldia-Durgapur Pipeline Augmentation Project and two LPG bottling plants in East Champaran and Banka. With this, the Union government aims to empower the ‘Atmanirbhar Bihar' by meeting the rising demand for LPG in the state.

Earlier on February 17, 2019, the foundation stone was laid by the PM on the 193-kilometre long Durgapur-Banka pipeline section, which is a part of the Paradip-Haldia-Durgapur Pipeline Augmentation Project. It is to be known that Durgapur-Banka section is the extension of the existing 679-kilometre long Paradip-Haldia-Durgapur LPG pipeline to the new LPG bottling plant at Banka in Bihar.

(The above story first appeared on LatestLY on Sep 13, 2020 01:40 PM IST. For more news and updates on politics, world, sports, entertainment and lifestyle, log on to our website latestly.com).