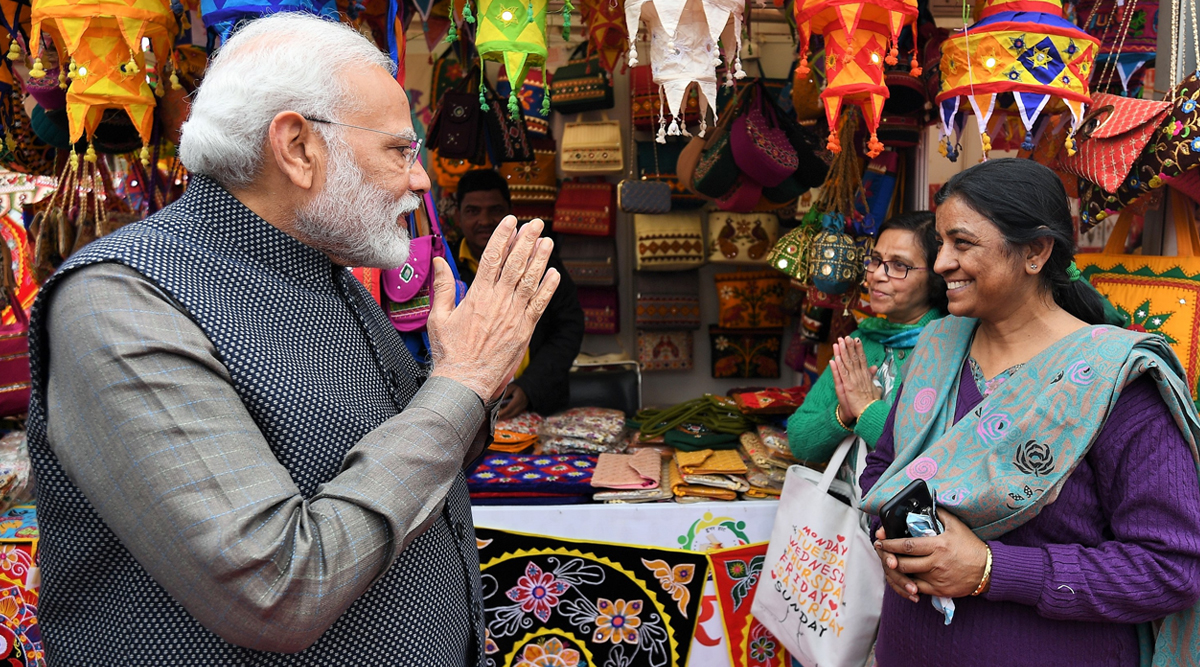 New Delhi, February 19: Prime Minister Narendra Modi on Wednesday made a surprise visit to "Hunar Haat" at Rajpath in New Delhi. PM Modi visited the stalls of master artisans, craftsmen and culinary experts from across the country participating in the "Hunar Haat". During his visit, the Prime Minister interacted with craftsmen. According to the government, more than 250 such stalls have been set up at India Gate lawns. PM Narendra Modi Makes Surprise Visit to 'Hunar Haat' at Rajpath; Relishes 'Litti-Chokha'.

The PM also shared videos of his visit to the exhibition. In one of the videos, he tried his hands at music. PM Modi played a musical instrument at one of the stalls. He also witnessed the cultural programs. PM Narendra Modi Pays Tributes to Chhatrapati Shivaji Maharaj on His 390th Birth Anniversary.

Glimpses of our culture and diversity in one map…have a look at this. #HunarHaat pic.twitter.com/dFWyO0KC3K

During his visit, Prime Minister relished "litti-chokha" and "kulhad" tea. Sources in the government said officials of the ministry were surprised when they came to know about the prime minister's visit. Modi, who was there for 50 minutes, ate "litti-chokha" a dough ball made of whole wheat flour and stuffed with 'sattu', and paid Rs 120 for it. Later he, tea served in "kulhad" with Minority Affairs Minister Mukhtar Abbas Naqvi and paid Rs 40 for two cups.

The exhibition was organised by the Ministry of Minority Affairs. The theme of this year’s Hunar Haat is "Kaushal ko Kaam". Also, more than 50 percent of the artisans participating were women. About three lakh master artisans, craftsmen and culinary experts have been provided employment and employment opportunities through Hunar Haat in the last three years, said the Central government. These beneficiaries include a large number of women artisans.