The report informs that the tragic incident took place while she was riding her vehicle on Shankar Sheth road at 11 pm on May 28. 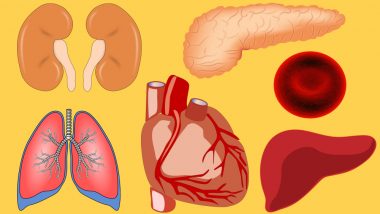 Mumbai, June 2: Three patients were gifted new lives after a liver and kidneys of a 50-year-old brain-dead woman were donated to them. Reports inform that the organs were given to three recipients in three different hospitals on Saturday. According to a report by Hindustan Times, the woman, who hailed from Pune, was declared brain dead after she met with an accident in May this year. The report informs that the tragic incident took place while she was riding her vehicle on Shankar Sheth road at 11 pm on May 28.

According to the HT report, the woman was taken to Jehangir Hospital, where she underwent computed tomography (CT) scan and was diagnosed with subdural hematoma. The report further informs that even after the surgery on the same night, the woman showed no signs of improvement. The woman was later declared brain dead by the doctors. Later, Dr Abhay Somani, cardiologist, Jehangir Hospital along with a few other doctors thought of the idea of organ donation to which the family agreed. Dead People Know When They Are Dead, Say Scientists; Human Brain Stays Alive For A While After Death.

The brother-in-law of the deceased was quoted in the report saying that their family is involved in social work since the last 40 years and not one person from our side or her family hesitated in agreeing for the donation of the organs. He said this was the best way to ensure that her memory lives on.

(The above story first appeared on LatestLY on Jun 02, 2019 11:23 AM IST. For more news and updates on politics, world, sports, entertainment and lifestyle, log on to our website latestly.com).