Dead People Know When They Are Dead, Say Scientists; Human Brain Stays Alive For A While After Death

The brain technically stays alive for a short while till the blood flow is cut off, letting the “dead” person know what’s happening around them. 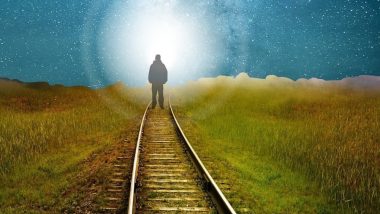 Dead people understand that they are dead. (Photo Credits: Pixabay)

Bone-chilling findings of a new research say that human beings may be aware that they are dead in the moments after they die. That’s because the human brain is still active – albeit for a short time –, letting the person register what is happening around him. The discovery was made by researchers from New York’s Stony Brook University School of Medicine after studying cardiac-arrest cases in Europe and US. A person’s time of death is based on the moment when the heart stops. Can Dogs See Ghosts? Here Are 5 Things Which Dogs Are Capable of That Humans Can't.

When the heart stops beating, the blood circulation to the brain ceases to function eventually. The process, however, can be long-drawn, taking hours to complete. The brain technically stays alive for a short while till the blood flow is cut off, letting the “dead” person know what’s happening around them.

Data collected from people who have been resuscitated after their heart stopped beating showed that they could remember what happened after they were pronounced “dead.” They can clearly remember the conversations between the doctors and the nurses even after their cardiac activity stopped. Kerala Becomes the First State to Confirm Brain Death Through Standard Operating Procedure.

Many of them have visual and auditory memory of everything that happens around them, things that they are theoretically not supposed to know. They know when the doctors pronounce them dead. Eerily, the dead become “trapped” in their own body.

The concept of Near Death Experience (NDE), where people who have “come back from the dead,” could be explained through this mechanism. Anita Moorjani, one of the well-known cases of NDE, recollected being completely aware of her surroundings while she was in a near-death stage.

Dr Sam Parnia, the lead researcher of the study, says, “What tends to happen is that people who've had these very profound experiences may come back positively transformed — they become more altruistic, more engaged with helping others.”

The study could open debates about human consciousness and what happens to it after the person dies.

(The above story first appeared on LatestLY on Nov 26, 2018 05:41 PM IST. For more news and updates on politics, world, sports, entertainment and lifestyle, log on to our website latestly.com).