According to a report by a French website, a judge will lead a judicial probe into the Rafale deal on "corruption" suspicions. 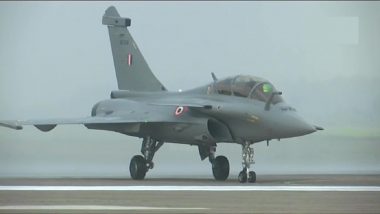 New Delhi, July 3: The French government has opened an investigation into the controversial Rafale deal with India. According to a report by a French website, a judge will lead a judicial probe into the Rafale deal on "corruption" suspicions. The "highly sensitive probe" was formally opened on June 14 following a decision by the Parquet National Financier(PNF), which tracks down serious economic and financial crime. What is Rafale Deal? All You Need To Know About French Fighter Jets Which Has Pitted Congress, BJP At Loggerheads.

India had purchased 36 Rafale jets from France in government to government deal in September 2016. Since then, the deal has been mired in corruption allegations. A probe has been ordered after Mediapart published a series of investigative reports in April this year, exposing role of an alleged middleman in the Rafale deal. It also accused the PNF and the French Anti-corruption Agency of "burying" suspicions. Rafale Deal Row: India Cheated to Tune of Rs 21,000 Crore, Alleges Congress.

After these reports, France's Sherpa NGO, which specialises in financial crime, lodged a formal complaint alleging corruption, influence peddling, money laundering, favouritism and undue tax waivers. Notably, the PNF had turned down Sherpa's request for a probe in the Rafale deal in 2018. In its complaint, the NGO also slammed the Dassault Aviation for choosing Reliance Group, which has no experience in aeronautics, as its India partner.

The Congress party and Rahul Gandhi have been attacking the Prime Minister Narendra Modi-led government over the Rafale deal. The grand old party has accused PM Modi of accepting in the Cabinet Committee on Security (CCS), chaired by him, the higher 'benchmark price' of Euro 8.2 billion instead of Euro 5.2 billion for the 36 aircraft, despite objections by the Defence Acquisition Council and the then defence minister Manohar Parrikar not approving it.

(The above story first appeared on LatestLY on Jul 03, 2021 02:15 PM IST. For more news and updates on politics, world, sports, entertainment and lifestyle, log on to our website latestly.com).