The IMD said that Churu, Jhunjhunu, Sikar, Ganganagar, Bikaner and Hanumangarh are likely to observe a cold wave pattern. The IMD has issued a warning of severe cold in around a dozen districts of Jaipur, Bharatpur, Bikaner, Ajmer and Kota divisions of northeast Rajasthan till December 31. 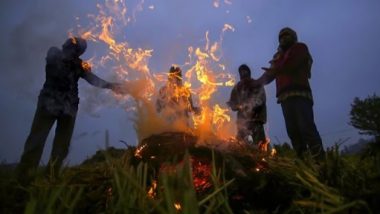 Jaipur, December 30: Severe cold wave conditions continued to grip parts of Rajasthan with Churu being the coldest at minus 1.5 degrees Celsius. According to the India Meteorological Department (IMD), the minimum temperature dipped at most places in Rajasthan as cold winds swept through the state. On Tuesday, Rajasthan's only hill station, Mount Abu, recorded a low of minus 4 degrees Celsius, followed by Sikar with minus 1 degree Celsius, Churu with zero degree Celsius and Pilani and Bhilwara with 1 degree Celsius each. La Nina in India: Country to Witness More Cyclones, Relatively Colder Winter This Year, Says IMD.

(The above story first appeared on LatestLY on Dec 30, 2020 11:03 AM IST. For more news and updates on politics, world, sports, entertainment and lifestyle, log on to our website latestly.com).