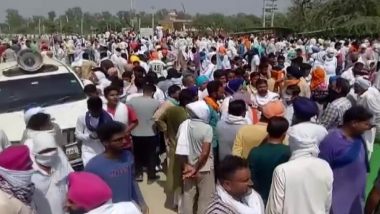 Sirsa, September 20: Farmers in Haryana stage protest against new agriculture law by blocking a major road in Sirsa. One of the protesters told news agency ANI, "The government should make laws making it punishable for private buyers to procure farm produces below MSPs. This will guarantee our sales." Agricultural Reform Bills: Rajya Sabha Passes 2 Farm Bills Amid Protests by Opposition Leaders And Farmers.

In other parts of the state also farers protested against the new law. In Hisar, farmers blocked the toll plaza near Mayyar village on the National Highway, reported The Tribune. Senior officials also reached at the protest site to hold talks with agitated farmers.

Protest by Farmers in Sirsa:

"The govt should make laws making it punishable for private buyers to procure farm produces below MSPs. This will guarantee our sales," says a protester. pic.twitter.com/0fq64zQDd8

The protesting farmers, under the banner of the Bharatiya Kisan Union (BKU), said they imposed a blockade on movement of vehicles, including public transportation, from rural areas to cities and towns as a mark of protest. They also burnt the copies of the farm bills. The farmers' organisations were demanding, among others, a continuation of the minimum support price to their produce. Agricultural Reform Bills: Farmers Stage Protests in Punjab, Haryana Against 'Anti-Farmer' Bills.

Earlier in the day, the Rajya Sabha passed two agriculture-related Bills amid a pandemonium due to protests by opposition members. The Upper House gave the nod to The Farmers' Produce Trade and Commerce (Promotion and Facilitation) Bill, 2020, and The Farmers (Empowerment and Protection) Agreement on Price Assurance and Farm Services Bill, 2020, as opposition MPs continued to shout slogans during their passage. Some lawmakers even staged a walkout in protest.

(The above story first appeared on LatestLY on Sep 20, 2020 03:30 PM IST. For more news and updates on politics, world, sports, entertainment and lifestyle, log on to our website latestly.com).