Rupee Extends Gains for 2nd Day; Closes Up by 9 Paise at 77.25 Against USD

At the interbank forex market, the domestic unit opened at 77.24 against the US dollar. It moved in a range of 77.17 to 77.31 during the day trade. The rupee finally closed at 77.25, registering a rise of 9 paise over its previous close. On Tuesday, the rupee had settled at 77.34 against the American currency. 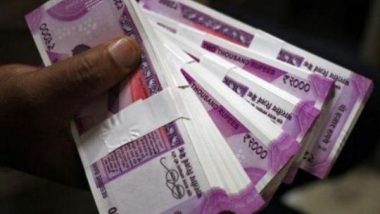 Mumbai, May 11: Rising for a second straight day, the rupee rose by 9 paise to settle at 77.25 against the US currency in a range-bound trade on Wednesday as the dollar retreated from its 20-year high levels and bond yields eased to below 3 per cent mark. Suspected RBI intervention in the futures market and most of the currencies trading flat ahead of the release of key US inflation data also supported the rupee.

At the interbank forex market, the domestic unit opened at 77.24 against the US dollar. It moved in a range of 77.17 to 77.31 during the day trade. The rupee finally closed at 77.25, registering a rise of 9 paise over its previous close. On Tuesday, the rupee had settled at 77.34 against the American currency. "The Indian rupee is see-sawing between gains and losses as the US 10-year yields have pulled back below 3 per cent mark. Risk sentiments are positive as China registered fewer COVID cases. Shanghai reported 51 per cent lower cases on Tuesday, which has made investors somewhat hopeful about a possibility of easing lockdowns in China," said Praveen Singh, AVP- Fundamental currencies and Commodities analyst, Sharekhan by BNP Paribas. Indian Rupee Slumps 52 Paise to All-Time Low of 77.42 Against US Dollar in Early Trade.

The upcoming US CPI print is expected to show a downtick to 8.1 per cent from 8.5 per cent in March. This could be the first decline in inflation readings after seven straight higher readings. Markets seem to be drawing some solace on this possible downtick, Singh said. "There are reports of RBI intervention in the futures markets, too. A decline in crude oil prices over the past couple of sessions has also lent support to the rupee at lower levels," Singh said, adding that the dollar eased from higher levels on positive Asian and European markets and a decline in US Treasury yields.

However, risk aversion in domestic markets and sustained FII outflows are capping sharp gains in the domestic currency. FIIs remained net sellers for the eighth consecutive session on Wednesday and sold assets worth about Rs 3,609 crore. Net FII outflows in the month of May stood at over Rs 21,000 crore. According to Anindya Banerjee, VP, Currency Derivatives & Interest Rate Derivatives at Kotak Securities Ltd, with most currencies trading flat ahead of important US inflation data tonight, USDINR too remained rangebound.

"Over the near-term, USDINR may continue to be range-bound between 76.80 and 77.70 levels on spot, due to RBI intervention and IPO related FPI flows," Banerjee said. "Rupee consolidated in a narrow range after falling to fresh all-time lows earlier this week. On the domestic front, market participants remained cautious ahead of the inflation number that will be released on Thursday.

"Expectation is that the number could come above the 7 per cent mark. From the US, CPI number will be released and is also expected to remain elevated," said Gaurang Somaiya, Forex & Bullion Analyst, Motilal Oswal Financial Services. The dollar index traded below the 20-year high level of 104.49 that it breached early this week ahead of the release of inflation data in the US. The dollar index, which gauges the greenback's strength against a basket of six currencies, was trading 0.39 per cent lower at 103.51.