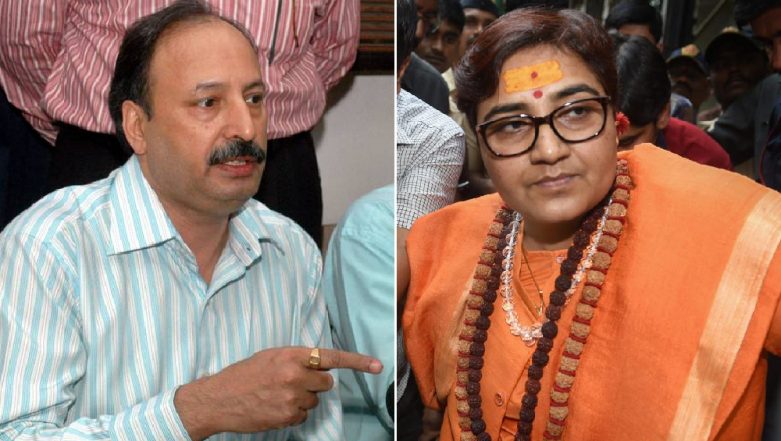 In her address, the BJP leader put allegations against Karkare, ex-chief of the Mumbai ATS and said, "He used to say, I will do anything, I will do anything to bring the evidence but I will not leave Sadhvi. He was cunning and traitor." Sadhvi Pragya Singh Thakur Breaks Down Recalling Her 'Torture' in Custody; Watch Video.

On April 17, the BJP fielded Sadhvi Pragya Singh Thakur, an accused in the 2008 Malegaon blasts, against senior Congress leader Digvijaya Singh from the Bhopal Lok Sabha constituency. Bhopal is set to go for polls in the sixth phase on May 12. The announcement was made hours after Sadhvi joined the BJP and said that she would "fight against those who are conspiring against the nation." Watch Video Here.

At the time of her arrest, Sadhvi was charged with allegedly planning the Malegaon blasts and providing a two-wheeler that was used to plant a bomb. Accroding to reports, a special National Investigation Agency (NIA) court in Maharashtra has dropped the charges under the Maharashtra Control of Organised Crime Act (MCOCA) against Sadhvi Pragya but framed charges under the provisions of Unlawful Activities Prevention Act (UAPA) against her.

The BJP leader had been associated with the RSS-linked youth outfit Akhil Bhartiya Vidhyarthi Parishad (ABVP) and the 'Durga Vahini', the women's wing of the Vishwa Hindu Parishad (VHP).