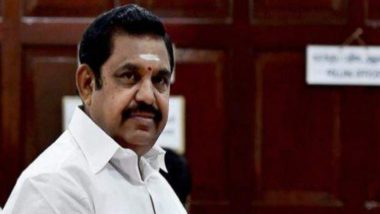 It is learnt that Palaniswami who is in Salem has sent his resignation letter to Purohit.

The DMK led by its President M.K. Stalin has won 126 seats and is leading in another 7 seats, as per the Election Commission of India. Tamil Nadu CM Edappadi K Palaniswami Submits Resignation to Governor Banwarilal Purohit As AIADMK Fails To Gain Majority in Assembly Elections 2021.

Along with its allies the DMK has won a total of 152 seats. Election for the 234-member Tamil Nadu assembly was held on April 6 and counting of votes began on Sunday.

Palaniswami, also the Joint Coordinator of AIADMK wished Stalin who was to be sworn in as the next Chief Minister.

On his part Stalin thanked Palaniswami for his wishes and also requested the latter's support and guidance for making Tamil Nadu as the best state.

(The above story first appeared on LatestLY on May 03, 2021 01:41 PM IST. For more news and updates on politics, world, sports, entertainment and lifestyle, log on to our website latestly.com).