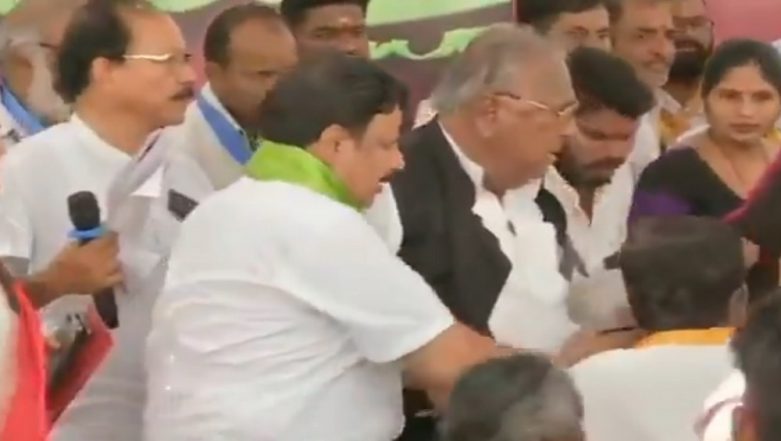 Hyderabad, May 11: A scuffle broke out between Congress leaders V Hanumantha Rao and Nagesh Mudiraj on Friday during the protest by opposition parties in Hyderabad against the state government. The opposition parties are protesting against the Telangana government over the issue of state board intermediate results. TS Intermediate Re-verification Result 2019: Telangana BIE to Declare Class 12 Revised Scores for Failed Students Post May 15.

The Board of Intermediate Education (BIE) in Telangana, has come under major criticism for allegedly goofing up in declaring the TS class 12 results 2019. Amid ongoing protest, the board assured to take the answer sheets for re-verification, and declare fresh TS Inter Board Result.

#WATCH Telangana: A scuffle broke out between Congress leaders V Hanumantha Rao and Nagesh Mudiraj during the protest by opposition parties today in Hyderabad against state govt over the issue of state board intermediate results. pic.twitter.com/lyUsD8ZDKU

The board at present is re-checking the answer sheets, and it sought more time from the Telangana High Court to complete the process. The court adjourned the hearing to May 15, and hence it is expected that TSBIE would release the Telangana Intermediate board result 2019 on that day or after May 15. Telangana Student Suicides: TS Inter Class 12 Teacher Suspended for Giving 0 Instead of 99 Marks.

As per reports, TS BIE has set up about 12 centres across the state to re-verify over 3.5 lakh failed candidates’ Inter answer scripts and has even engaged a Noida-based Datatech Mehodox for result processing, as recommended by a three-member committee set up by the state to look into technical discrepancies in 12th result. More than 9.74 lakh candidates appeared for the Intermediate exam in March this year, out of which 3.28 lakh failed.