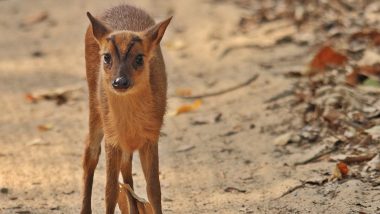 Thane, January 29: Maharashtra Forest Department rescued a fawn of a barking deer or Indian muntjac from 3 people and arrested them for smuggling the endangered species in Bhiwandi. According to forest officers, the fawn of the barking deer is around 3-4 months of age. The barking deer is a protected species under the Wildlife Protection Act and is often hunted for its meat.

“A few days back, we had received a tip-off from our sources about some people trying to sell a barking deer. Forest department officials from the Padgha range laid down a trap by posing as potential buyers and arrested three persons who were trying to sell a fawn of barking deer,” reported Mid-day, quoting Gajendra Hire,  Deputy Conservator of Forest (DCF) as saying. Uttarakhand: Endangered Pangolin Rescued in US Nagar, 1 Arrested.

As per the reports, the accused trio, identified as Ramesh Walimbe, Bakru Hilam, and Ganesh Wagh, are residents of Alyani village in Shahapur district, were arrested by the officials near the Paramount Hotel. Police seized two motorcycles from the trio. During interrogation, the trio confessed that they had caught the fawn from the Shahapur forest. The accused has been booked under the Wildlife Protection Act, 1972. An investigation into the case is underway

(The above story first appeared on LatestLY on Jan 29, 2022 04:56 PM IST. For more news and updates on politics, world, sports, entertainment and lifestyle, log on to our website latestly.com).