The Uttar Pradesh Assembly elections are turning out to be a bipolar contest between the BJP and the Samajwadi Party (SP), as per the latest ABP-CVOTER-IANS State of States 2021 tracker. 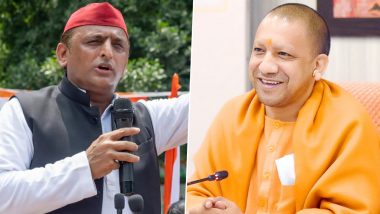 New Delhi, Oct 8: The Uttar Pradesh Assembly elections are turning out to be a bipolar contest between the BJP and the Samajwadi Party (SP), as per the latest ABP-CVOTER-IANS State of States 2021 tracker.

Deshmukh said the anti-BJP votes are consolidating behind the SP and the scope for growth of other parties like the BSP and the Congress in the run up to the elections is now limited. PM Narendra Modi Gets 66.4% Support in Terms of Satisfaction of Work: ABP-CVoter Survey.

Deshmukh said the SP can get a big boost if its leader Akhilesh Yadav can hit the ground and even be 1 per cent active of what his father, Mulayam Singh Yadav, used to be, otherwise the arithmetic gap of vote share will favour the BJP.

The ABP-CVoter-IANS tracker was conducted between September 4 and October 4 across 690 Assembly seats in five poll-bound states with a sample size of 98,121.

As many as 69.6 per cent said that due to incidents like Lakhimpur, the image of the Uttar Pradesh government is getting tarnished.

As many as 59.6 per cent said the Lakhimpur incident will prove harmful for the BJP in the upcoming Assembly elections in Uttar Pradesh.

A total of 63.2 per cent said the image of the UP government has got tarnished because of the law and order situation in the state over the past few days.

As per the tracker, the BJP led by Chief Minister Yogi Adityanath is wining the state with 245 seats, followed by SP with 134 seats. The BJP is losing 80 seats compared to the previous elections, while the SP is gaining 86 seats.

(The above story first appeared on LatestLY on Oct 08, 2021 10:16 PM IST. For more news and updates on politics, world, sports, entertainment and lifestyle, log on to our website latestly.com).