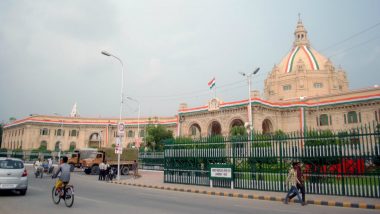 Lucknow, July 13: The monsoon session of the Uttar Pradesh Assembly will be held from August 20, official sources said on Monday.

The session is expected to have around four sittings in which the first supplementary budget of the current fiscal 2020-21 and around a dozen bills, for which ordinances have been promulgated when the Houses were not in session, will be passed.

The session will be held by observing social distancing and other health protocols.

Assembly officials said that the new norms and guidelines to be followed will be approved at an all-party meeting.

Legislators will be seated at a sufficient distance, and some may even be shifted to the visitors' gallery.

Passes for the press galleries will also be curtailed for this session.

The state government is under constitutional obligation to hold the monsoon session since there cannot be gap of six months or more between two sessions of the Assembly.

The Assembly's Budget Session was adjourned sine die on February 28 and hence the next session will have to be called before August 28.

Last month, Speaker Hriday Narain Dikshit had indicated that the monsoon session could be held through videoconference. He had, however, ruled out the possibility of holding a 'hybrid session' on the lines of British Parliament.

In such a session, half of the members attend the House while the rest join the proceedings through videoconference.

"Due to technical reasons, such a session will not be possible. We will have a normal session, but with restrictions," said an official.

(The above story first appeared on LatestLY on Jul 13, 2020 01:44 PM IST. For more news and updates on politics, world, sports, entertainment and lifestyle, log on to our website latestly.com).