Chief Minister Yogi Adityanath has warned that no religious programme should be permitted on the roads. He said that all such events should take place inside the premises of religious places. 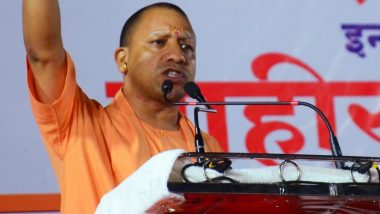 Jhansi, May 8: Chief Minister Yogi Adityanath has warned that no religious programme should be permitted on the roads. He said that all such events should take place inside the premises of religious places. The chief minister, who was on a visit to the Bundelkhand region on Sunday, also took a strong note of the recent rape case of a girl in a police station in Lalitpur.

He directed the district magistrate and the superintendent of police to take strict action against the culprits. "Our government is committed to serving people through development and public welfare works. Any slackness will not be tolerated," he said, adding that strict measures should be taken to curb the activities of the mafia. Yogi Adityanath Government Removed 53,942 Loudspeakers From Various Religious Places in Uttar Pradesh.

Yogi Adityanath also directed the officials and employees at every level to reach their offices on time and hold 'jan sunwai' between 10 a.m. and 11 a.m. every day. "A dialogue should be held with traders, Udyog Bandhu and banks at least once a month to look into the possibilities of generating employment opportunities in the region. All pending works related to pharma park in Lalitpur should be completed at the earliest," he said.

He further said that Aarogya Melas should be held regularly while organic and natural farming be promoted in Bundelkhand. The chief minister also inspected a 500-bed under construction hospital block in the Jhansi Medical College.

In Babina, he inspected an under-construction water treatment plant, where Jhansi Mayor Ramteerath Singhal informed him that there was a delay in the completion of the project.

(The above story first appeared on LatestLY on May 08, 2022 07:46 PM IST. For more news and updates on politics, world, sports, entertainment and lifestyle, log on to our website latestly.com).