Vikas Dubey Encounter: Gangster Had 3 Bullets on His Chest and One on Arm, Says LLR Hospital Chief 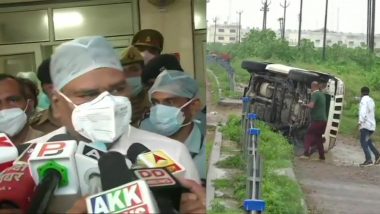 Kanpur, July 10: The principal of Lala Lajpat Rai Hospital in Kanpur -- Dr RB Kamal -- on Friday said the gangster Vikas Dubey had three bullet injuries on the chest and one on his arm. Dr Kamal added that condition of three policemen, injured during the Vikas Dubey encounter, is stable.

Informing about the health update of the injured policemen, Dr Kamal said, as quoted by news agency ANI, "The condition of the 3 injured police personnel is stable; bullets brushed by two of them. Vikas Dubey had 3 bullet injuries on the chest and one on his arm." Vikas Dubey Encounter: 4 Policemen Injured, Media Following UP STF Convoy Stopped Before Encounter, Here's What We Know So Far.

The condition of the 3 injured police personnel is stable; bullets brushed by two of them. #VikasDubey had 3 bullet injuries on the chest and one on his arm: Dr RB Kamal, Principal, LLR Hospital, Kanpur pic.twitter.com/sdvUqgO8TH

Earlier, UP ADG (law & order) Prashant Kumar confirmed the death of dreaded gangster Vikas Dubey in the encounter. He said, "After car overturned, Vikas Dubey tried to snatch Police weapon and attempted to flee after which there was retaliatory fire by Police in which he was injured. He was declared dead after being taken to hospital. We'll issue an official statement soon."

Following the encounter, Congress General Secretary Priyanka Gandhi and Samajwadi Party chief Akhilesh Yadav slammed the Yogi Adityanth government. Both of them alleged conspiracy. Meanwhile, reports arrived that media persons, who were following the convoy bringing back gangster Vikas Dubey, were stopped by police in Sachendi area of Kanpur before the encounter around 6.30 am in which the criminal was killed.

(The above story first appeared on LatestLY on Jul 10, 2020 01:02 PM IST. For more news and updates on politics, world, sports, entertainment and lifestyle, log on to our website latestly.com).