Weather Forecast: Kerala, Tamil Nadu And Puducherry to Receive Isolated Heavy Rainfall During Next 3 to 4 Days 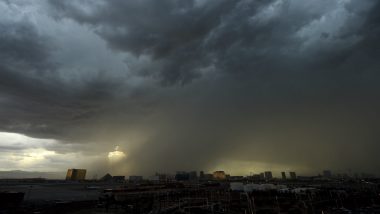 New Delhi, April 13: The India Meteorological Department on Tuesday issued a warning of Isolated heavy rainfall over Kerala and Mahe during the next five days. The IMD, in its weather bulletin, also said that heavy rainfall is expected over Tamilnadu, Puducherry and Karaikal during the next four days and over Coastal and South Interior Karnataka during the next three days. March 2021 Third Warmest in 121 Years in Terms of Monthly Average Maximum Temperature: IMD.

Meanwhile, Telangana can witness heavy showers on April 14. Meanwhile, Madhya Maharashtra, Marathwada and Konkan and Goa are expected to receive isolated rainfall with a thunderstorm, lightning and gusty winds over the next two days. From April 14-16, Vidarbha and Chhattisgarh are also likely to receive isolated rainfall. A hailstorm is expected over Telangana during April 13-15. Weather Forecast: Goa, Telangana, Chhattisgarh, MP Likely to Receive Rainfall During Next 3 to 4 Days.

Isolated heavy rainfall over Kerala & Mahe during next 5 days; over Tamilnadu, Puducherry & Karaikal during next 4 days; over Coastal & South Interior Karnataka during next 3 days and over Telangana on 14th April, 2021. pic.twitter.com/OCDkEKFW1c

Meanwhile, a fresh active Western Disturbance is very likely to cause scattered to fairly widespread rainfall with a thunderstorm, lightning and gusty winds over Western Himalayan Region during April 14-17. Adjoining plains are expected to receive isolated light rainfall with a thunderstorm during April 16-17. The IMD also issued a warning of thunderstorms and duststorms at isolated places, also over West Rajasthan on April 15 and 16 and over East Rajasthan on April 17 and 17.

There will be no significant change in maximum temperatures in part of the country due to thunderstorm activity over the next four to five days. However, Gujarat is the exception where the maximum temperature is likely to fall by 2-3 Degree Celsius during the next two to three days.

(The above story first appeared on LatestLY on Apr 13, 2021 05:16 PM IST. For more news and updates on politics, world, sports, entertainment and lifestyle, log on to our website latestly.com).