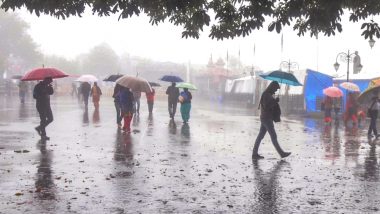 "With likely setting in of north-easterly winds in the lower tropospheric levels over Bay of Bengal and extreme south Peninsular India, the southwest monsoon is likely to withdraw from the entire country around October 26. Simultaneously, the northeast monsoon rains are also likely to commence over the southeast peninsular India from around October 26," IMD said in a release. Southwest Monsoon Withdrawn from Many States, Says IMD.

As against the normal date of October 15 when the southwest monsoon completely withdraws from across India, this time the process is delayed. The commencement of withdrawal too had started on October 6 against the normal date of September 17. Meanwhile, the southwest monsoon withdrawal line continues to pass through Kohima, Silchar, Krishna Nagar, Baripada, Malkangiri, Nalgonda, Bagalkote, Vengurla.

Low pressure systems over Kerala and Tamil Nadu near the Arabian Sea and another over Odisha and Andhra Pradesh coast near Bay of Bengal had delayed the process, IMD had said earlier. Because of the low-pressure systems and cyclonic circulations Kerala, Tamil Nadu and parts of Karnataka have experienced heavy to extremely heavy rainfall.

(The above story first appeared on LatestLY on Oct 21, 2021 08:56 AM IST. For more news and updates on politics, world, sports, entertainment and lifestyle, log on to our website latestly.com).