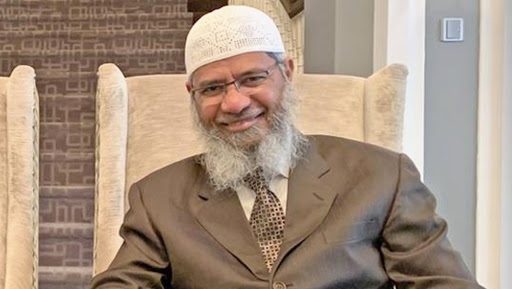 New Delhi, June 12: India has made a formal request to Malaysia for extradition of Zakir Naik, a radical Mumbai-based preacher who is wanted in India in cases of money laundering an hate speeches. Zakir Naik Ready to Return to India If Supreme Court Ensures His Safety.

Naik, who used to preach on the now-banned 'Peace TV', has been living in Malaysia for around 2 years in a bid to escape the Indian law after cases were filed against him here in the wake of a terror attack in Bangladesh in 2016.

"Government of India has made a formal request for extradition of Dr Zakir Naik. We would continue to pursue the matter with Malaysia," External Affairs Ministry spokesperson Raveesh Kumar said here on Wednesday. He said India has extradition arrangements with many nations and in the past, there are numerous cases of successful extradition (of fugitives) to India.

"The fairness of the Indian justice system has never been in question," Kumar added. On Monday, Malaysian Prime Minister Mahathir Mohamad said his country "has a right not to extradite" Naik if he is not going to get a free trial in India.

Naik has been on the run ever since he was booked in India in 2016 for hate speeches and money laundering after a terror attack on Holey Artisan café in Dhaka. One of the attackers had reportedly claimed that he had been inspired by the preacher's speeches. Zakir Naik Extradition: India Waiting for Malaysia's Response.

The Enforcement Directorate (ED), which has charged him with money laundering to the tune of Rs 193 crore, is planning to get a Mumbai court issue a non-bailable arrest warrant.

On Tuesday, Naik said he was willing to return to India if the Supreme Court gave in writing that he would not be arrested and jailed till he is actually convicted. In a statement, he said while he has trust in the Indian judiciary, he had no faith in the prosecution system.