Bihar Assembly Elections 2020: PM Narendra Modi Addresses Rally in Sasaram; From Paying Tribute to Ram Vilas Paswan to Speaking on Article 370 Abrogation in Jammu & Kashmir, Here is What He Spoke About

Prime Minister Narendra Modi addressed a rally, on Friday, at Biada Maidan in Sasaram, Bihar as a part of Bihar Assembly Election 2020 campaign. He payed his tributes to Ram Vilas Paswan and Babu Raghuvansh Prasad Singh. Modi congratulated Bihar for its fight against COVID-19 and claimed that NDA will form the government in Bihar. 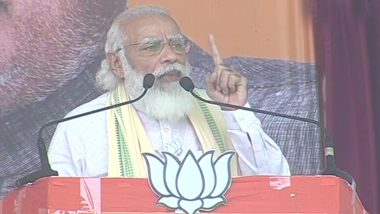 PM Modi said,"Bihar has lost its two sons recently” and paid his respects Ram Vilas Paswan and Babu Raghuvansh Prasad Singh. He congratulated Bihar for its strong fight against the coronavirus and said, "If there was no rapid work in Bihar, then this epidemic would have killed many more people." Modi said that the work and efforts of Bihar government against COVID-19 is commendable.

Modi claimed that the NDA will form the government in Bihar, citing survey results. He said that people have decided that those who have a history of making Bihar 'Bimaru' will not be allowed to return. "The people who once ruled Bihar are again looking at the developing state with their greedy eyes. But, Bihar must not forget who pushed them backward, that was the time when there was worsening law & order situation and corruption in the state," said Modi while attacking the opposition.

He paid his tribute to the martyred "Jawanas of Bihar" who lost their lives in Galwan valley and Pulwama attack and said, "I bow my head at their feet and pay respects. He called out opposition from its stand on the new farmers bills and called it the supporters of "bicholiye and dalaal." "Mandi and MSP are excuses, the opposition wants to save the brokers and middlemen," said Modi. He also said that the opposition plans to re-introduce Article 370 in Jammu & Kashmir if it returns to power.

PM Modi  talked about the recently launched  'Swamitva Yojana' which enables people to download their property cards through an SMS link sent on their mobile phones,  followed by the physical distribution of property cards by respective state governments. He said his government has prioritised the poor in the corona times with DBT of money in the accounts of poor women, free gas cylinders and distribution of food essentials. Preparations Underway for PM Modi's Rally in Sasaram, Bihar.

PM Modi will address rallies at Gaya and Bhagalpur later today. The Bihar Assembly Election 2020 will be conducted in three phases between October 28 and November 7 for a new government and the results will be announced on November 10.

(The above story first appeared on LatestLY on Oct 23, 2020 12:41 PM IST. For more news and updates on politics, world, sports, entertainment and lifestyle, log on to our website latestly.com).