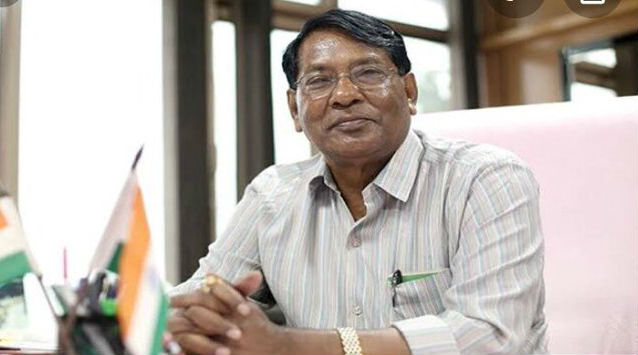 New Delhi, November 24: Asserting that the Opposition is fighting the upcoming Jharkhand Assembly polls on local issues, state Congress chief Rameshwar Oraon on Sunday alleged that the BJP is raising issues such as that of the Ram temple in Ayodhya to divert people's attention from its governance failures.

His remarks come days after Bharatiya Janata Party (BJP) chief Amit Shah raised the Ayodhya issue at poll rallies in Jharkhand, accusing the Congress of stalling the case in the Supreme Court. Oraon, a former IPS officer who took over as the Jharkhand Congress chief in August, also said groupism had come down in the party and there would be a reorganisation of the state unit post the polls. Rajnath Singh Says 'No Power Can Stop Ram Temple Construction in Ayodhya'.

Oraon asserted that the Jharkhand Mukti Morcha-Congress-Rashtriya Janata Dal alliance is making "sincere efforts" to stop the BJP government, led by Chief Minister Raghubar Das, from coming back to power in the state by fighting the upcoming polls on local issues.

The alliance is highlighting the poor condition of roads, the irregular supply of water and electricity, the bad condition of schools due to non-appointment of teachers and the lack of quality education in the state, he said.

"We are fighting on local issues, not national issues," Oraon said.

Asked about Shah raising the Ram temple issue in poll rallies, he said it was a "futile exercise" and the matter was settled with the Supreme Court verdict. "The BJP government has failed to deliver on bread-and-butter issues and that is why they are raising issues like Ayodhya to divert the attention of the people," the Congress leader said.

"The Supreme Court has given a verdict that a Ram mandir will be constructed and a trust will be formed. People are satisfied. They are not looking up to the BJP now for it. The Ayodhya matter is not an issue in the Jharkhand polls," he added. Oraon asserted that had the Supreme Court verdict on the politically sensitive issue not come, the Ram temple might have been an issue in the state polls, but that was not the case now.

"The BJP cannot say it has given employment. It has not constructed good roads, not supplied regular electricity in villages and not made arrangements for irrigation. It has failed to solve the basic problems of people, therefore, BJP leaders are talking about this (Ayodhya)," Oraon, who is contesting the polls from Lohardaga, said. Shah accused the Congress on Thursday of stalling the Ayodhya case in the Supreme Court.

"Everyone wanted a Ram temple in Ayodhya, but the Congress kept stalling the case," the BJP chief said while addressing election rallies in Manika and Lohardaga, as he kicked off the saffron party's campaign for the Jharkhand Assembly polls. Asked about the BJP's nationalism poll plank, Oraon said everybody is a nationalist in Jharkhand.

"These (BJP) people were nowhere when Birsa (Munda) fought against the British, when Sidhu and Kanhu fought. Tribals are nationalist people. They (BJP) cannot teach us a lesson on nationalism in Jharkhand," he asserted. The state Congress chief accused the BJP of having failed to stop starvation deaths and incidents of lynching.

He also asserted that the JMM-Congress-RJD alliance was united and the Jharkhand Vikas Morcha (Prajatantrik) could not be a part of the opposition coalition as it was asking for 25-26 seats, which could not be given. "In our view, the JVM(P) does not have a base here. It is a candidate-based party and it was demanding about 25-26 seats, which the alliance was not able to give," Oraon said.

Talking about the clash between Congress' national spokesperson Gourav Vallabh and BJP's incumbent Chief Minister Raghubar Das, he said Vallabh is very popular in the state and therefore has been fielded. Oraon also asked what is the guarantee that former BJP minister Saryu Roy, who is contesting as an independent from the same Jamshedpur East constituency, will not go back to the saffron party if he wins. Ayodhya Verdict: Filing Review Petition Challenging Supreme Court's Judgement Will Harm Hindu-Muslim Unity, Says Minority Panel Chief.

The JMM, the Congress and Lalu Prasad's RJD announced a pre-poll tie-up for the state recently with former chief minister Hemant Soren as the combine's CM face. The Congress will contest 31 of the 81 seats in the Jharkhand assembly, the RJD will contest seven, while the biggest chunk of the alliance's share has gone to the JMM, which will field candidates on 43 seats. The Jharkhand Assembly polls will be held in five phases between November 30 and December 20, and the counting of votes will be taken up on December 23.