COVID-19 Crisis In India: It’s Time To Stand Together and Not To Criticise, Says Former Union Minister Kapil Sibal

"Stand Together India, it's time to stand together not time to criticise after this battle is finally won will find out who was wrong and who was right," Sibal said in a tweet. 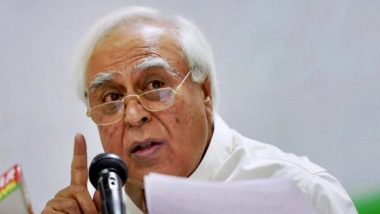 New Delhi, May 12 : After war of words erupted between Congress and the BJP over the handling of the pandemic, Congress leader Kapil Sibal on Wednesday said, its time to stand together and not a time to criticise.

"Stand Together India, it's time to stand together not time to criticise after this battle is finally won will find out who was wrong and who was right," Sibal said in a tweet.

The Congress has been attacking the government over mishandling of the pandemic and not heeding to the advise of ex-PM Manmohan Singh and the opposition parties. JP Nadda Slams Rahul Gandhi and Other Top Congress Leaders for ‘Duplicity, Pettiness’ Amid COVID-19

The Congress on Tuesday accused the BJP of being "arrogant", soon after BJP President J.P. Nadda shot off a letter to interim party chief Sonia Gandhi, saying that raising issues and making suggestions to the government on the pandemic is the duty of the opposition parties.

In his letter to interim Congress President Sonia Gandhi, Nadda lashed out at her party saying that in the fight against the pandemic, the conduct of topmost Congress leaders, including its former chief Rahul Gandhi, will be remembered for its "duplicity and pettiness".

Congress General Secretary Ajay Maken said the situation in the country is pathetic as dead bodies were seen floating in the Ganga river in Bihar's Buxar district on Monday.

"The government is unable to provide treatment, vaccines and even honourable last rites to the deceased," Maken said, as he asked the government to shed the arrogance and help the people.

The party said the BJP should follow 'Rajdharma' as the Congress is only doing its duty and the government should accept its mistake in handling the pandemic and start free vaccination for all. The Congress also reiterated its demand for an all-party meeting on the COVID-19 situation.

(The above story first appeared on LatestLY on May 12, 2021 01:48 PM IST. For more news and updates on politics, world, sports, entertainment and lifestyle, log on to our website latestly.com).