The counting of votes will take place on May 23 and the election result of Dindori Lok Sabha seat will be declared on the same day. 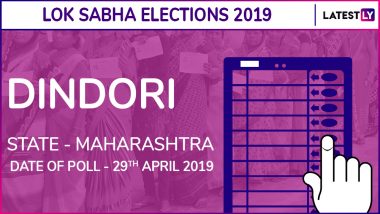 Mumbai, March 24: BJP's Bharti Pawar was elected as Member of Parliament from Dindori in Maharashtra. Dindori Lok Sabha constituency went to polls on April 29 in the fourth phase of general elections. The counting of votes took place on May 23 and the election result of Dindori Lok Sabha seat will be declared on the same day. Harishchandra Chavan of the BJP is the sitting Member of Parliament (MP) from Dindori parliamentary seat.

The BJP denied renomination to Chavan, who has been representing the tribal-dominated seat since 2009, and reposed faith in NCP turncoat Bharti Pawar. Notably, Chavan defeated Pawar in 2014 polls by a huge margin. The NCP declared Dhanraj Haribhau Mahale as its candidate. The process of filing nomination for Dindori Lok Sabha election began from April 2. Check Full Schedule of Lok Sabha Elections 2019.

In 2014 Lok Sabha elections, the alliance of the BJP, Shiv Sena and Swabhiman Paksha together won 42 seats in Maharashtra. The Congress bagged twos eats, while the NCP four. Lok Sabha elections will take place in seven phases - on April 11, April 18, April 23, April 29, May 6, May 12 and May 19.

(The above story first appeared on LatestLY on May 24, 2019 04:11 PM IST. For more news and updates on politics, world, sports, entertainment and lifestyle, log on to our website latestly.com).