Congress insiders have confirmed that Patel is their prospective candidate from the Jamnagar seat in west Gujarat. The region was the hotbed of the Patidar agitation which rocked the state in 2015-16. 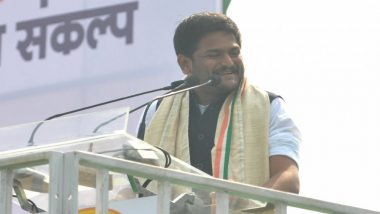 Ahmedabad, March 12: Patidar quota agitation leader Hardik Patel joined the Congress on Tuesday in presence of party president Rahul Gandhi. He was welcomed into the party fold at the ongoing Congress Working Committee (CWC) meeting in the Gujarat capital. Among leaders present at his induction ceremony included party's UP general secretary Priyanka Gandhi.

Congress insiders have confirmed that Patel is their prospective candidate from the Jamnagar seat in west Gujarat. The region was the hotbed of the Patidar agitation which rocked the state in 2015-16. 'We Are Fighting Against Thieves', Says Hardik Patel at Opposition Rally.

Patel himself has expressed his will to contest in the upcoming polls from Jamnagar. In a series of statements posted on Twitter, the 26-year-old said he ready to jump into the electoral fray if there is "no legal hindrance".

"I would also like to state that if there is no legal hindrance and party decides to field me in electoral politics, I would abide by the party’s decision. I am taking this step to serve 125 core citizens of India," he said.

The Jamnagar seat is currently held by BJP lawmaker Poonamben Maadam of the Bharatiya Janata Party (BJP). On reports of Congress considering to field Patel against him, Gujarat Chief Minister Vijay Rupani said the move will backfire, as the Patidar community has realised that "Hardik Patel is a design of the Congress party".

Despite the BJP's claim, political pundits are quick to point out that the support extended by Patel's Patidar Anamat Andolan Samiti (PAAS) to the Congress in 2017 assembly elections, aided the latter to register its best electoral performance in the last 15 years.

(The above story first appeared on LatestLY on Mar 12, 2019 04:19 PM IST. For more news and updates on politics, world, sports, entertainment and lifestyle, log on to our website latestly.com).