Jammu And Kashmir: Omar Abdullah Works Out at Gym And Watches Hollywood Movies in Detention, Mehbooba Mufti Confines Herself to Books 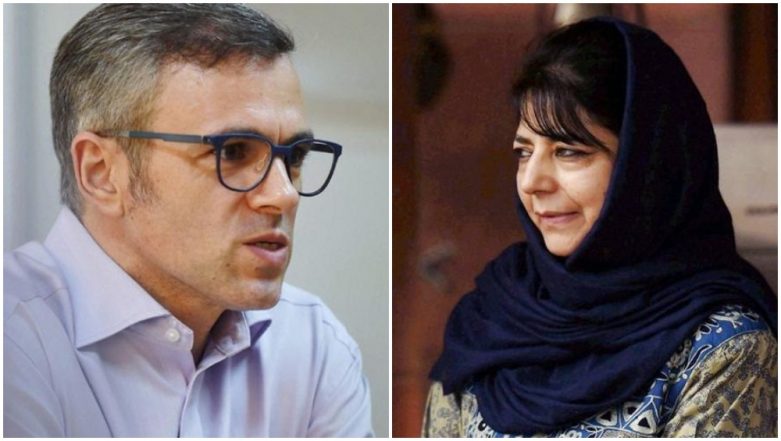 Srinagar, August 18: Two former chief ministers of Jammu and Kashmir - Omar Abdullah and Mehbooba Mufti - have been under detention since August 5 when the Centre revoked the provisions of Article 370 that gave special status to the state. In detention, Omar Abdullah spends time watching Hollywood movies and working out at the gym. Mehbooba Mufti has buried herself in books, said a report.

Omar Abdullah, the vice-president of the National Conference, is detained at the government guesthouse at Hari Niwas Palace in Srinagar, while People's Democratic Party (PDP) chief Mehbooba Mufti is placed under detention at a JKTDC-owned hut at Chashme Shahi. Initially, both the leaders were lodged at Hari Niwas Palace, but authorities had to separate them following a spat after only a day or two. Jammu And Kashmir: 2G Mobile Internet Services Restored in Five Districts, Telephone Lines Resume in Valley.

Authorities have provided DVDs of Hollywood movies to Omar Abdullah. He is allowed a morning walk inside the palace grounds. A gym facility is also available for him, Times of India reported. The National Conference leader was also seen writing something in the notebook provided to him. Mehbooba Mufti, on the other hand, has confined herself to books. Iltija Javed, Mehbooba Mufti's Daughter, Writes to Amit Shah Over Abrogation of Article 370, Says 'Kashmiris Have Been Caged Like Animals'.

Another former chief minister and National Conference chairman Farooq Abdullah has been under house arrest at his residence on Gupkar Road. Several other leaders of National Conference, PDP and Sajjad Lone's People’s Conference are lodged in separate rooms at Centaur Lake View Hotel. On Friday, Congress's Jammu and Kashmir unit chief Ghulam Ahmed Mir and spokesperson Ravinder Sharma were taken into custody.