As per the Commission, the entire counting process, especially guarding the strong rooms and the counting centres, was being done in an absolutely fair and transparent manner. 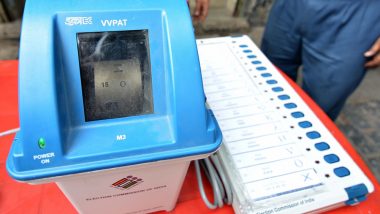 New Delhi, May 22: The Election Commission (EC) on Wednesday rejected the Opposition's demand to count VVPAT slips before the commencement of counting of votes, saying that it didn't find it "feasible to accede to this demand." A delegation of 22 opposition parties had met the poll panel demanding that VVPAT (Voter Verified Paper Audit Trail) slips should be counted before the commencement of counting of votes polled in the Electronic Voting Machines (EVMs). They had also demanded matching of all VVPAT slips with the EVMs in an Assembly segment in case of a discrepancy in random matching.

The poll panel said in a release that it deliberated on the issue with senior officials. "After two rounds of in-depth discussions yesterday and today, it has neither been found possible nor feasible to accede to this demand in the overall context and especially in view of the judgment of the Supreme Court. The judgement says random selection of VVPATs shall be subjected to the process of slip verification as per the guideline 16.6 of the EVM Manual in force," the EC release said. VVPAT Count to Be Held at the End Like in the Past: Election Commission Sources.

It also said there were some other procedural issues. As per the Commission, the entire counting process, especially guarding the strong rooms and the counting centres, was being done in an absolutely fair and transparent manner.

(The above story first appeared on LatestLY on May 23, 2019 06:49 AM IST. For more news and updates on politics, world, sports, entertainment and lifestyle, log on to our website latestly.com).