Padma Shukla, who announced her exit from the Bharatiya Janata Party (BJP) earlier today, has joined the Congress party. Shukla was heading the state's Social Welfare department. She held a state cabinet rank. 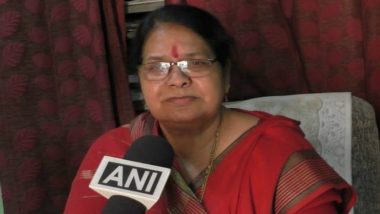 Explaining why she quit the BJP, Shukla mentioned, "Whatever I have done to date is for the workers. Sanjay Pathak, who is a state minister, creates problem for the workers. I couldn't do anything to save them. I tried my best to have a positive relationship with them, but it didn't work." Shukla was a BJP member since 1980. Madhya Pradesh: Social Welfare Dept Chief Padma Shukla Resigns from BJP's Primary Membership.

In her resignation letter to BJP state president Rakesh Singh, she expressed her disappointment with the party saying, "I have been a primary member of the party since 1980 and have discharged my duties accordingly. I am upset because of the negligence and exploitation of the party workers in Vijayraghavgarh constituency post-2014 by-polls. Thus, I am resigning from the primary membership of the party."