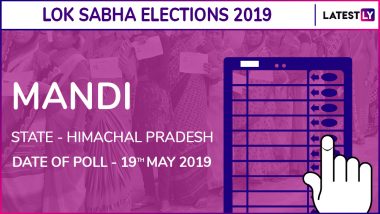 Shimla, May 23: The counting of votes for the Mandi Lok Sabha Constituency in Himachal Pradesh began at 8 AM on Thursday, May 23 along with three other parliamentary seats in the state. The results were declared by evening. Ram Swaroop Sharma of BJP won the seat. Polling in the Mandi parliamentary seat was held in the seventh and last phase of Lok Sabha Elections 2019 on May 19. According to Election Commission of India (ECI), a total voter turnout of 72.25 per cent was recorded. Lok Sabha Elections 2019 Schedule: Voting In 7 Phases From April 11 to May 19, Counting And Results On May 23; Check All Dates For General Elections.

The constituency, which falls in the central Himachal Pradesh, has witnessed fierce political battles over the years between the Congress and the Bharatiya Janata Party (BJP). The Mandi Parliamentary Constituency (PC-2) consists of 17 Assembly seats. These include Kullu, Manali, Lahaul & Spiti and Kinnaur among others.

There are 53,30,154 registered voters for the four constituencies -- Shimla (SC), Mandi, Hamirpur and Kangra in the state. Himachal Pradesh Lok Sabha Elections 2019 Schedule: Constituency-Wise Complete Schedule Of Voting And Results For General Elections.

BJP's Ram Swaroop Sharma had won the Lok Sabha Election 2014 from Mandi constituency. He had defeated Pratibha Singh of the Congress and is the sitting MP from Mandi.

(The above story first appeared on LatestLY on May 24, 2019 02:59 PM IST. For more news and updates on politics, world, sports, entertainment and lifestyle, log on to our website latestly.com).