Netanyahu and his wife Sara tried their hands at kite flying at Gandhi Ashram along with PM Modi. 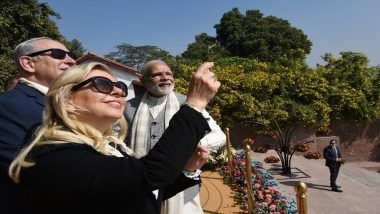 Ahmedabad, January 17: After an eight-kilometre roadshow from Ahmedabad airport, Prime Minister Narendra Modi and his Israeli counterpart Benjamin Netanyahu arrived at Sabarmati Ashram on Tuesday. PM Modi introduced Netanyahu and his wife Sara to the tradition of kite-flying.  The Israeli couple tried their hands at kite flying at Gandhi Ashram along with PM Modi. Both the leaders along with Netanyahu’s wife Sara paid tribute to Mahatma Gandhi at Sabarmati Ashram.

The Prime Minister showcased Patang(kite) and Firki (kite string) that are used during Uttarayan festival by crores of Gujaratis to Israeli counterpart Benjamin Netanyahu and first lady at Gandhi Ashram in Gujarat.

A huge crowd had gathered to welcome Narendra Modi and Israeli PM Netanyahu as the two leaders begin their roadshow in Ahmedabad. After visiting Sabarmati Ashram, both the leaders are scheduled to take a helicopter to the campus International Centre for Entrepreneurship and Technology, an autonomous institution located in Dev Dholera village, about 50 km from Ahmedabad, for the exhibition.

As per reports, around 50 stages were made along the route that PM Modi and Netanyahu took to Sabarmati Ashram. People from different states and union territories welcomed the two leaders as they passed by during their roadshow.

Ahmedabad rolled out a red-carpet welcome today for Netanyahu and his wife- who are in India on a six-day visit. Netanyahu and PM Modi will hold a roadshow, which will begin from the city airport and end at the Sabarmati Ashram, a journey of eight kilometres. Netanyahu and his wife Sara Netanyahu also wrote a message at Sabarmati Ashram.  As the day progresses, Netanyahu will visit a Centre of Excellence for Vegetables in Vadrad village, Sabarknatha, as well as a new campus for an incubation centre for start-ups in Dev Dholera village on Ahmedabad’s outskirts.

(The above story first appeared on LatestLY on Jan 17, 2018 01:15 PM IST. For more news and updates on politics, world, sports, entertainment and lifestyle, log on to our website latestly.com).