Prime Minister Narendra Modi on Saturday halted his speech and directed the medical team that was accompanying him to check on a Bharatiya Janata Party (BJP) workers who had fainted. 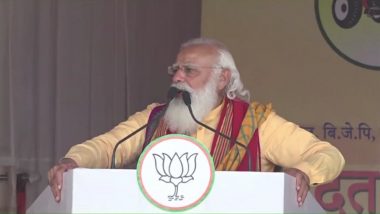 Baksa, April 3: Prime Minister Narendra Modi on Saturday halted his speech and directed the medical team that was accompanying him to check on a Bharatiya Janata Party (BJP) workers who had fainted. PM Narendra Modi was addressing a rally in Tamulpur in Assam's Baksa district when BJP worker Hari Charan Das fainted due to dehydration. PM Modi then instructed the doctors who were accompanying him to look after the BJP worker. PM Modi Came to Assam 35 Times, Manmohan Singh Didn't Visit the State Even 10 Times in 10 Years: Nadda.

"The PMO medical team, please go and see the worker who is facing issues due to dehydration. Doctors who have come with me, please help that person immediately," the Prime Minister can be heard saying in the video going viral on social media. As part of the protocol, a four-member team of medical experts travels with the Prime Minister. They carry key medical equipment such as defibrillator, a portable suction machine and an infusion pump. Assam Assembly Elections 2021: 'I Am Not Like PM Narendra Modi Who Lies to India 24/7', Says Rahul Gandhi at Chaygaon Rally.

Pausing in the middle of his speech at Tamulpur in Assam, PM @narendramodi promptly directed the team of PMO doctors to give immediate assistance to an old-aged person, Shri Hari Charan Das, in the rally who was apparently dehydrated.

He has been attended to and is stable now. pic.twitter.com/iuCMCy9LqF

In his speech in Assam before the third and final phase of voting on April 6, PM Modi hit out at the 'Mahajot', a grand alliance led by the Congress for working in favour of a particular community. He said that working for a particular section is called "secularism" while working for everyone without discrimination makes you "communal."

The Congress, which was in power for 15 years in the state till 2016, is contesting the three-phase polls as part of a 'Mahajot' grand alliance with the All India United Democratic Front (AIUDF), Bodoland People's Front, the Anchalik Gana Morcha, the Communist Party of India (Marxist), the CPI and the CPI-ML. The results will be declared on May 2.

(The above story first appeared on LatestLY on Apr 03, 2021 01:50 PM IST. For more news and updates on politics, world, sports, entertainment and lifestyle, log on to our website latestly.com).