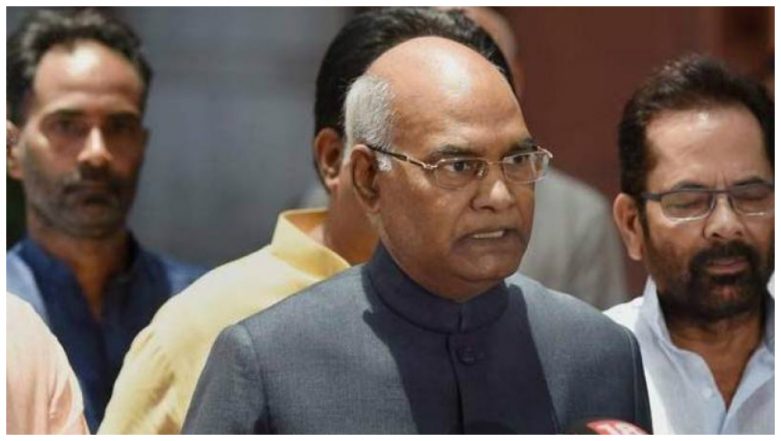 New Delhi, June 20: President Ram Nath Kovind will address the joint sitting of both the houses of Parliament on Thursday. The President will deliver the address at the Central Hall of Parliament in Delhi. The first session of the 17th Lok Sabha after the Lok Sabha elections 2019 commenced on Monday. Newly-elected members, some of them first-time MPs took oath and election of the Speaker was held. Parliament Monsoon Session 2019: Linguistic Diversity On Show as New Members Take Oath in Lok Sabha.

On Wednesday, NDA nominee and BJP MP from Kota, Om Birla has been unanimously elected as the Speaker of 17th Lok Sabha. All the political parties including  Congress, DMK, TMC, BJD, TDP, YSR Congress, JD(U) and Shiv Sena supported the motion moved by Prime Minister and Leader of the House, Narendra Modi to choose Birla as the Speaker.  Parliament Monsoon Session 2019: PM Narendra Modi Plays Statesman, Says 'Every Word of Opposition Counts'.

Congratulating Shri Om Birla, in his address at Lok Sabha today, the Prime Minister said that it is a proud moment for all the members to have such a distinguished personality as the Speaker of the House and commended the role played by Om Birla in the transformation and overall development of Kota, Rajasthan.

On the first day of the monsoon session, Prime Minister Narendra Modi reached out to the opposition and said hey need not "bother about their numbers" as their every word is "valuable" to the government. He urged all MPs to be impartial in the House and address issues related to the larger interest of the nation.