Polling to be held in single phase on December 7 across the 200 seats of Rajasthan. Results to be declared on December 11, along with the four other states where polling will be simultaneously held. 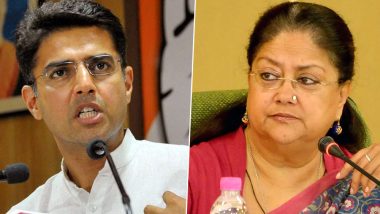 Jaipur, October 6: The Election Commission of India on Saturday announced the dates and complete schedule for the Rajasthan Assembly Elections 2018. Voting in the state will take place on December 7, while counting of votes will be held on December 11, following which the results will be out.

Chief Election Commissioner OP Rawat said that the Model Code of Conduct has come into place in Rajasthan with immediate effect. This would prevent the state government, or the Centre, to announce a new policy or roll-out subsidies and sops for the Rajasthan populace. Full Schedule of Five-State Assembly Elections 2018.

Nomination to Begin From

The tenure of the 200-seat Rajasthan Assembly will end on January 20, 2019. An ABP-CVoter opinion poll had earlier this year predicted that the Congress is likely to win 130 seats in Rajasthan while the BJP would be down to 57.  Full Schedule of Telangana Assembly Elections 2018.

Congress, which is pitched favourite to win the forthcoming polls, is yet to announce its chief ministerial candidate fearing internal rebellion. Analysts, however, are firm that the party would pose faith in senior leader Sachin Pilot after bagging a majority. Full schedule of Mizoram Assembly Elections 2018.

The BJP, meanwhile, has decided to project incumbent Chief Minister Vasundhara Raje as the party's face in Rajasthan despite a section of its cadres marking dissent against her governance.

In a major jolt to the Congress weeks ahead of the elections, the BSP has decided not ink a pre-poll pact with the grand old party. BSP supremo Mayawati, while addressing the press on Wednesday, clarified that her party would be contesting alone in Madhya Pradesh and Rajasthan.

(The above story first appeared on LatestLY on Oct 06, 2018 03:26 PM IST. For more news and updates on politics, world, sports, entertainment and lifestyle, log on to our website latestly.com).